The 2009 Adventure Party was Club Penguin’s first ever party of its kind. It began when Rockhopper sailed to Club Penguin and brought many plants with him, which then grew immensely, turning the island into a jungle. In addition to rooms around the island being decorated there was a free Green Safari Hat for everyone at the Plaza. Members could also pick up the Tropical Bird item at the Tree Forts, a special party room. There was also a Adventure Party Background everyone could earn by completing the scavenger hunt. For the scavenger hunt you needed to find certain plants and animals. As for the new stage play released that day, it was updated to show Fairy Fables again. This was its second showing, with the first one being in November 2008. 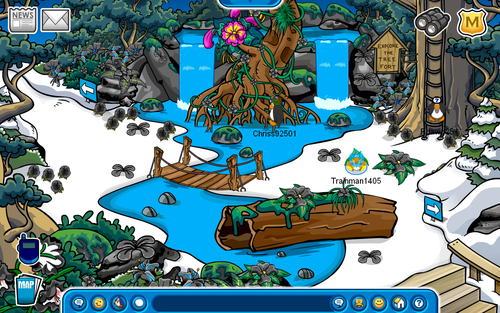 Moving on to 2013, the new pin was the Neon Flamingo Pin and was hidden in the Coffee Shop. The igloo music was updated with some Monsters University related tracks and also classics such as I’ve Been Delayed. Finally, that month’s new furniture catalogue featured many new items relating to Monsters University, such as the Monster Door Station, Monster Archway, and JOX Pennant.