Earlier today I was passed along some convincing information and pictures by V0rtex of what appears to be Jetpack Boost, the next Club Penguin game coming to the My Penguin iPad application. I cannot confirm this to be real as V0rtex said he will not be passing along where he obtained the game’s files, however it does seem to be legit. I guess we’ll find out for sure how real this is soon enough!

“I have obtained the files from the My Penguin server, I will not give you the files due to the fact that it is an early release of the game and it was not of Club Penguins intentions for these to be seen. Unfortunately it doesn’t run because I don’t actually have the 1.2 version of the app.”

What exactly is this apparent Jetpack Boost game? It’s a spinoff of Club Penguin’s game Jetpack Adventure, located at the Lighthouse Beacon. This game was added to Club Penguin in November 2006. Remember Spike Hike’s blog post “What’s New in Club Penguin for Summer 2013”? At the end of May he made a post hinting at Club Penguin’s plans for the Summer. One of his most important parts from his post:

And thanks again to everyone who helped make “My Penguin” a top iPad app around the world! We have even more planned for it, too!! I’m sworn to secrecy, but let me say that we will refuel a classic Club Penguin game. And we will bring even more to mobile that will make you feel right at home.

Refuel a classic game you say? Jetpack Adventure contains fuel and is classic. Not only that, but Jetpack Boost, being the apparent spinoff, is definitely a refuelled version of that game.

Before I get on to the screenshots, here’s some additional information from V0rtex:

Swipe up and down to control your penguin in Turbo

You are INVINCIBLE in Turbo Mode! Smash through obstacles for bonus

Collect Robot Penguins to protect you from getting hurt

You can collect up to 3 Robot Penguins at a time.

Gary’s MAGNETRON 3000 has malfunctioned, and now coins are floating everywhere.

Watch for “!” warnings. They tell you something dangerous is coming next

Hello User! I need your help!

My Magnetron 3000 has gone haywire and shot coins all over the sky!

Use your jetpack to fly as far as you can and collect the coins while avoiding obstacles!

Now for the screenshots I was sent: 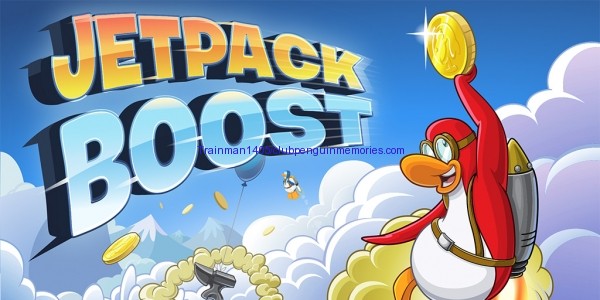 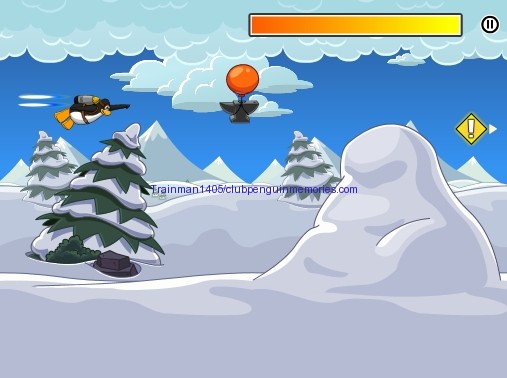 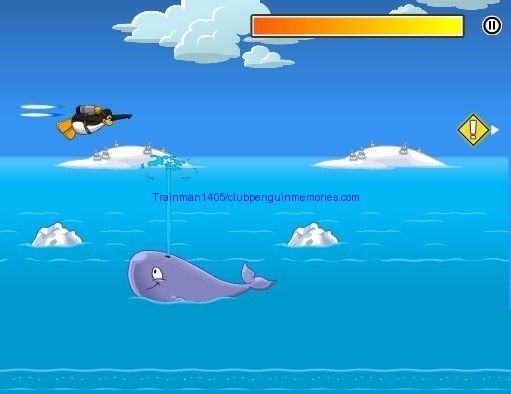 How exactly is the game played though? Jetpack Adventure requires arrow keys, which the iPad does not have. Instead, Jetpack Boost is going to be like Halfbrick’s hit game Jetpack Joyride. For those of you unfamiliar with that awesome game, your character is moving in the air automatically. You have to tap the screen to move your character upward and then it’ll go back down, so you have to tap the screen again to go up so you don’t hit the ground. (In Jetpack Joyride you can run on the ground but in Jetpack Boost you can’t) In the meantime there are obstacles you’ll have to avoid, too.

(Gameplay footage of Jetpack Joyride)
In Jetpack Boost you’ll be able to fly through caves, over the island, and avoid different obstacles ranging hanging from balloons such as pianos and even robots. Of course, you’ll be able to collect coins along the way too.

Now, as I mentioned earlier I cannot confirm just how real this information is. On the off-chance I could get Spike Hike to tell me yes or no, I asked him if the information I received is real or not. His answer was not too revealing, saying he can’t confirm or deny it being real. However, he does have a history of saying “:-)” to me when I’m posting something exclusive, and he did so in his reply to me. Check it out: 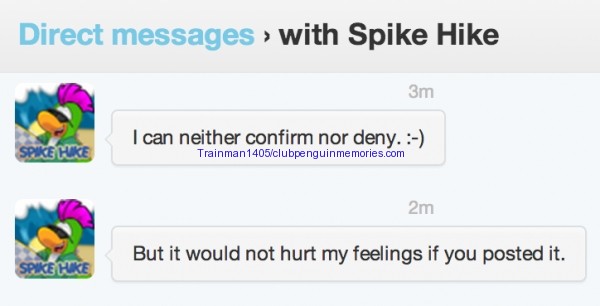 Some of you might recall this post I made earlier this year wondering if the different playercard design Spike Hike was tweeting belonged to the unannounced My Penguin app. He replied to my tweet with the post saying “:-)” and nothing else. Sure enough, days later, My Penguin was announced by him on the blog!

That just about wraps up this post! The My Penguin 1.2 release date is unknown but chances are it will be soon, maybe even as soon as this Thursday. Also in the update is igloo editing.