There’s something weird going on. And I’m here to investigate it.See below for a small update – Polo Field tweeted about his unfollowing.

Just under a month ago, on the 7th of March Polo Field announced shortly after being less active on Twitter that he’s going to “start spending more time on the blog” and that he “wants to make some more fun posts” as shown:

Even since then, he’s only tweeted for others to see and didn’t reply to anyone except a single adult 21 days ago. He’ll still favourite a few tweets, but since then he’s just been tweeting nothing Club Penguin related. Before then he’d reply to us all of the time. Compare: 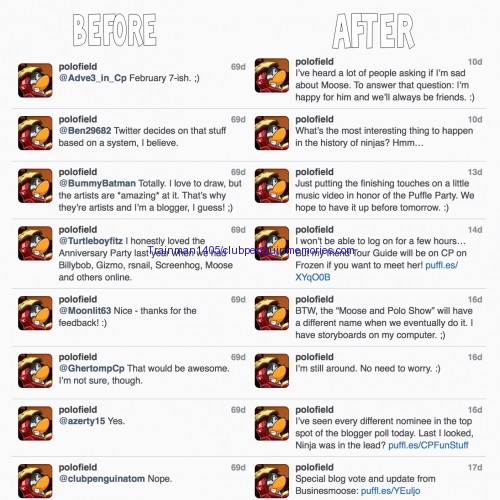 Alright, fine. It seemed believable at the time that he was going to work on fun posts. (more on that later) But then without explanation, just like Businesmoose, he made his website/blog private. He has yet to comment on that, too. With Businesmoose’s I and others think he made his blog private since it was his last week at Club Penguin, but you never know. 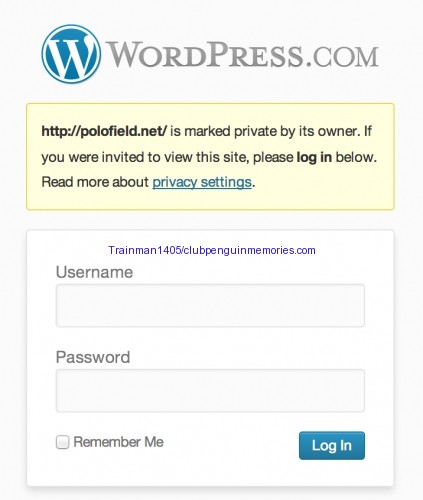 But today was the final straw that made me realise something is going on. Up until today, he followed a little over 1,000 different penguins on Twitter. Then earlier that number dropped to about half that as shown. 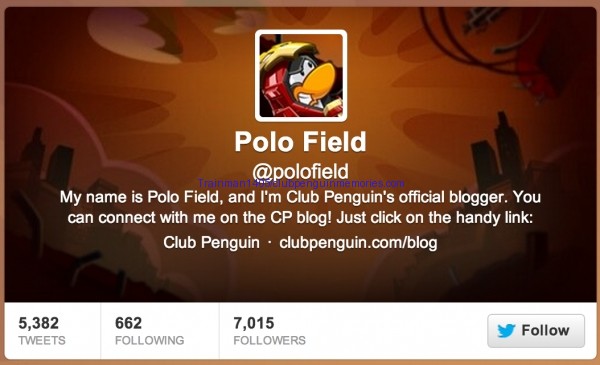 He has since finished unfollowing everybody, once again without saying anything about it. He now only follows a few Club Penguin/Disney related accounts…and Happy77. Not even Businesmoose or Lane Merrifield/Billybob anymore. It’s strange. UPDATE: He’s unfollowed Happy77 too now…the plot thickens further! Thanks Buddytoe! 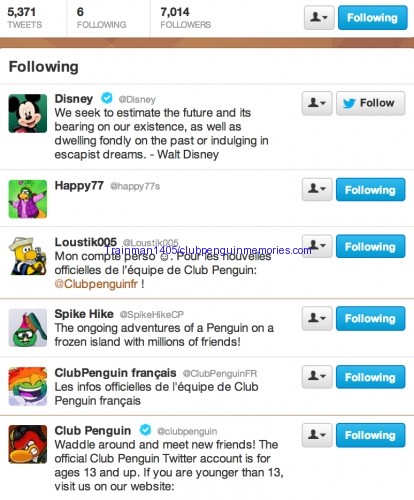 So what’s up and why the sudden change? Where are these “fun posts”? Polo Field has just been posting the same old weekly updates and holding Field Friday’s ever since then, acting like nothing has changed. Another weird thing is around the time of this change, and it may be a coincidence, is that his blog name went from “Polo Field” to “PoloField” without the space inbetween the words. Does it mean anything? In fact, he only made 12 blog posts in March.

UPDATE: Polo Field acknowledged him unfollowing us but as said, he can’t say why…

…he also replied to a few tweets and said why his blog was shut down. It was an experiment apparently? 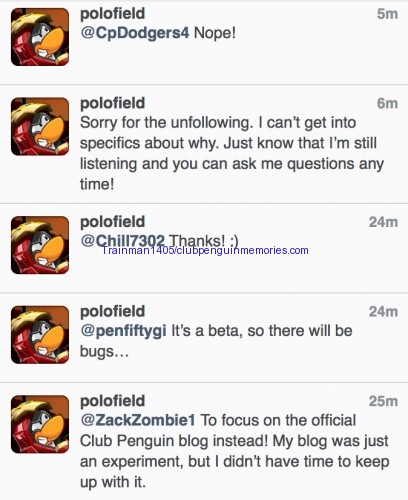 Is it a coincidence it magically happens after I point all of this out? Honestly, I think not.

155 thoughts on “What’s Going On With Polo Field? Is Club Penguin Restricting Him? (Updated)”