Early this evening I received an authentic looking email from Polo Field inviting me to join Club Penguin’s Beta Testing Program. Except as real as it looks, it wasn’t.

I will admit I fell for it, but as soon as I did I noticed the mistake I made. It was good timing since Card-Jitsu Snow Beta will be here in a few weeks. I don’t know how many penguins received the fake email I got but if you received it, ignore it. (so far I know Ninja O Dark, another blogger, got it in addition to me. I’m not sure about anyone else. Chances are not many did get it, but either way it’s a good chance to educate you! :P) It’s completely fake. How did I know? Several reasons, and this is important to learn in the future. First of all, Polo Field’s email address always shows up as polofield@clubpenguin.com, not PoloField@clubpenguin.com as you can see in the top of the email I received. (shown above)

Second of all, emails from Polo Field’s actual email (at least in my email client, Sparrow) have his penguin as his icon, like this:

Digging even further though to see if it’s fake which always gives it away, is looking at what is called the email’s header. It’s kind of like the technical source code for the email. It shows where it was sent from, where it was sent to, what web servers it passed through, and the message’s contents. The one I received was sent through 000webhost, a free webhost some penguins use for their websites, especially site testing. Club Penguin DOES NOT use 000webhost. There is no actual mention of it being from Club Penguin. 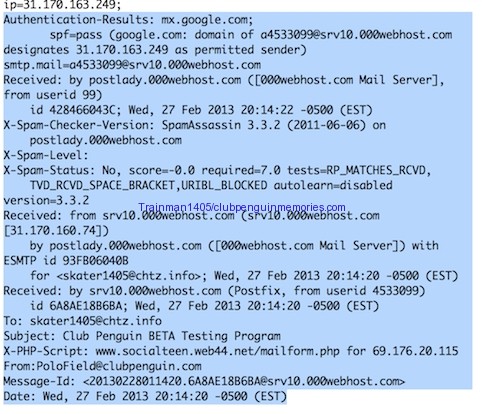 If you look at the header/source of official emails from Club Penguin, you’ll see at least one mention of Club Penguin’s website in the jumble of information.

The whole purpose of this post is to educate you – if you got the same email as I did or something similar and it seems strange, question its authenticity before replying, especially if it’s asking for something personal such as your password. You can always send a separate email to Club Penguin Support or call them up and ask if it’s real or not, but they’ll most likely say no.