This morning when I woke up and checked my email I received a tip from Bloxxerman, who you may recall has been the one sending me the inside scoop on Club Penguin’s magazine issues over the past year. This one is about Red Nose Day, which is hosted by a British charity called Comic Relief to raise money. Here’s what Bloxxerman said to me:

I was in the Disney Store today and flicked through their Red Nose Day brochure, and there’s a special thing about Club Penguin in it! It says:

“Make us laugh! Send us a screenshot of your penguin telling a joke and we’ll donate £1 to Comic Relief. Go to www.disney.co.uk/rednoseday for more information.”

I did just what it said and submitted: (I’m sorry for my corny joke)

On the page towards the bottom it says “Turning funny into money”. On the right you’ll see Rockhopper and the Club Penguin logo, saying “Coming soon”. So there is some sort of Club Penguin related promotion with Red Nose day, whatever it is. I’ll update this post when it no longer says coming soon 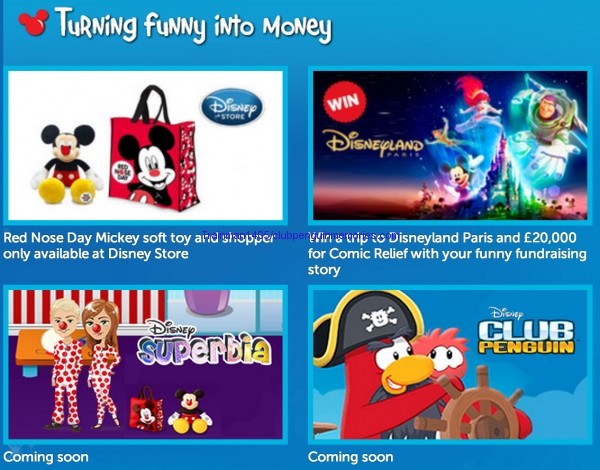 In the meantime, go to www.disney.co.uk/rednoseday and submit your joke! As far as I’m aware, unlike the brochure said, you don’t actually need to submit a screenshot, and can just do text. For every submission Disney will donate £1, up to £100,000 to the Comic Relief charity. I skimmed over the terms of service and is says nothing about having to live in a certain area such as the United Kingdom to enter. Now let’s reach the maximum £100,000 in donations!