On the 31st of December in 2010 there were a few updates. This is the only year with updates so far.

First of all the 29th field op was released. Its location was at the Hidden Lake in the bottom left corner where the abandoned Aqua Grabber machine is. The Happy New Year postcard amongst others was also added to the postcard catalogue, to go along with it being the end of the year and the start of a new one. To go along with the New Year Club Penguin also added their usual fireworks to the Ski Hill and Iceberg, and also released the Party Favors Pin. 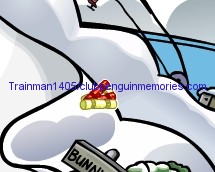