So far there have only been updates on Club Penguin on December 12th in the year 2008. In 2008 the play at the Stage was updated, the second ever Coins For Change event kicked off, Rockhopper arrived, there was a new igloo catalogue, new furniture catalogue, the igloo music was updated, and the postcards were updated.

The play at the Stage was Quest for the Golden Puffle. This was it second time being at the Stage, with its first one being earlier in the year in April 2008.

For Coins For Change, like usual you could donate your coins to decide where the money Club Penguin is donating goes. You could donate to kids who are sick, kids who are poor and cannot go to school, and kids without parents or who have been hurt by war. You could donate in 50, 250, or 500 coin intervals. Donation stations were set up at the Beach, Plaza, and in Rockhopper’s Quarters. Speaking of Rockhopper, as I mentioned before he arrived at the island. His free item was the Red Sailor’s Cap, which was a returning item that was first released in September 2006 when the Lighthouse opened. Members could purchase the Green Parrot (400 coins) to wear or the Coins For Change Banner (500 coins) and Globe (350 coins) furniture items for their igloos. For the holidays Treasure Hunt was given a special Christmas theme. 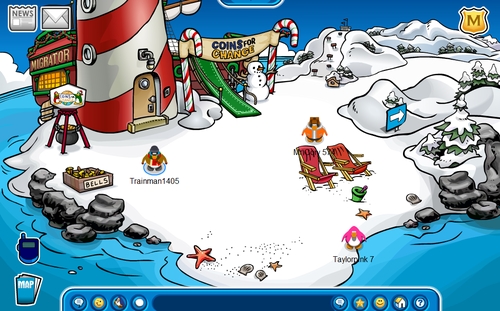 The December 2008 igloo catalogue brought back the Snow Globe igloo, setting penguins back 3,700 coins. The furniture igloo on the other hand had some nice Christmas themed items like the Christmas Tree and Stocking, or even the Leaning Tree. Igloo music The igloo music was updated with the Snowy Holiday and Christmas Piano Medley tracks being added. Finally, postcards were added for Coins For Change, Christmas, the New Year, and Quest for the Golden Puffle.