This is really late, but here is my roundup of this year’s Coins For Change and Holiday Party. The purpose of this post is to combine all known information about this party. The first mention of this year’s Holiday Party was in Club Penguin Magazine Issue 11, which was released on the 14th of November. It didn’t say much, but did specify that the party and Coins For Change would again be making a comeback – which of course makes plenty of sense.

Not too long after, on the 22nd of November, this sneak peek of December was posted on Club Penguin’s blog. Now that more has been revealed overtime you can probably make sense of what was shown other than being clueless originally and making some guesses. 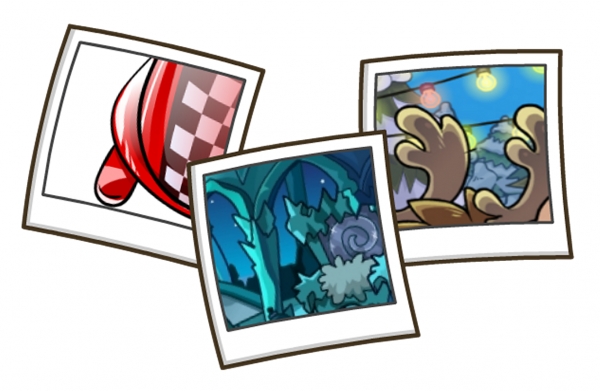 Then on November 29th, about three weeks ago, a new login screen was added to tease that members could freeze their friends. We have since found out more about this, and that members can turn into Reindeer Puffles and everyone can turn into race cars! 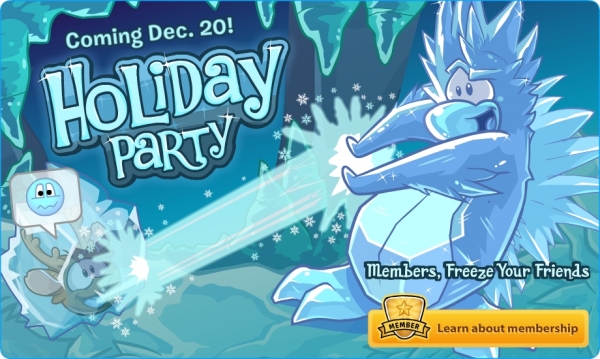 The new homepage design also gives us a general idea. 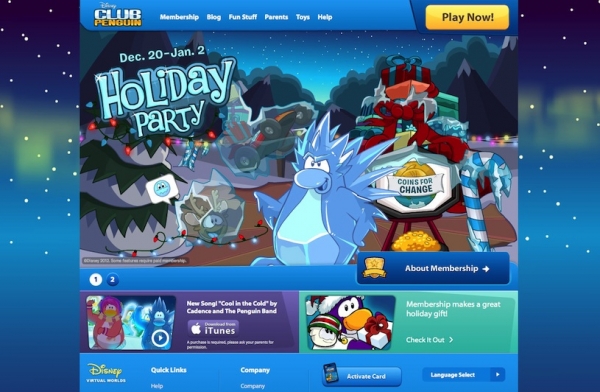 On the 4th of December the Disney UK page advertising Club Penguin gave us some in depth information. It originally said this, but it got slightly changed: 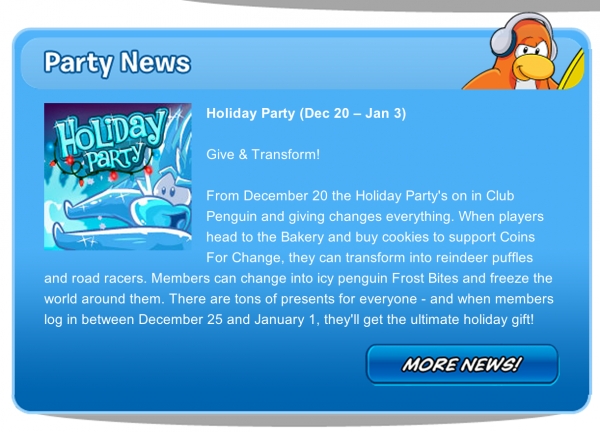 From December 20 the Holiday Party’s on in Club Penguin and giving changes everything. When players head to the Bakery and buy cookies to support Coins For Change, free players can transform into road racers. Members can become reindeer puffles and can even change into icy penguin Frost Bites and freeze the world around them. There are tons of presents for everyone – and when members log in between December 25 and January 2, they’ll get the ultimate holiday gift!

A press release from Disney (roughly translated into English) states the following about the party:

From December 20 through January 2, Club Penguin players can explore an island full of Christmas gifts and initiatives and fun activities to do and share with other users:

Coins for Change: The sixth one, the global initiative of donated virtual coins to help with charitable causes around the world. To collect coins, users can perform a variety of activities, from organising benefit concerts in their igloos to play any of the mini games on the island. For the first time, players can see in real time how their currencies rise over the party and also the total amount of coins donated in the virtual world.

Famous penguins: Rockhopper, the dearest pirate, will visit the island and bring some cookies recipe very special, and will also present a complete catalog of exclusively themed objects.

Transformation of the players: They can bake cookies in the bakery, and then sell virtually to any user who momentarily transformed into a race car. In addition, friends will have the opportunity to become Puffles-frozen reindeer and penguins, who can become everything that has ice around him, including his friends.

Costumes and exclusive furniture for igloos: Children can dress up and be creative sets Christmas special items for members. In addition, there will be a new edition of the catalog “Sports and Snow”, with amazing sled costumes.

New facilities: There will be several exclusive rooms decorated with novel, such as the kingdom of ice in the spring, the banquet at the Pizzeria and the race track at the Gift Shop for penguins turned into cars, the battle of snowballs on the beach, and a play space for Puffle-reindeer in the forest.

Christmas Gift: All players who log between 20 and December 25 will receive virtual gifts including Christmas.Also, between 25 December and 2 January, they will award the arctic white colour to penguins, who have been eagerly awaiting, and there will be a special surprise exclusively for members. Also, those who help distribute gifts will receive special prizes.

Here is the Gift Shop that Spike Hike tweeted: 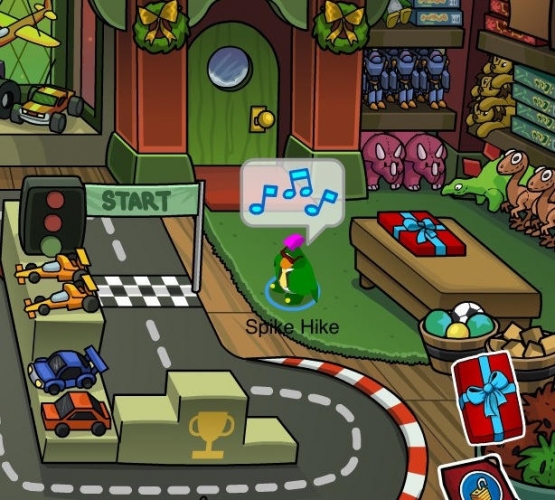 This is the Dock (Frost Bite Room) that Spike Hike tweeted: 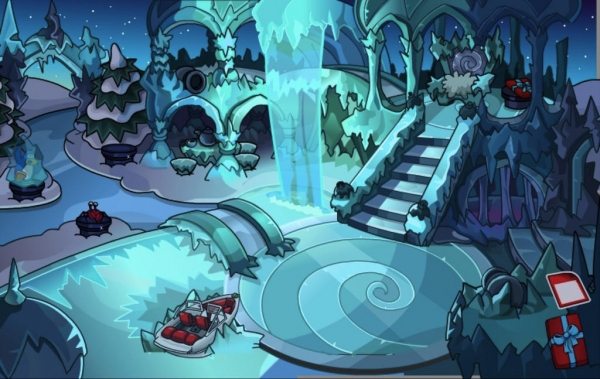 Here are the temporary new emotes (and the Beach) from Polo Field: (Rockhopper will be there – Aunt Arctic will not be at this party according to Club Penguin) 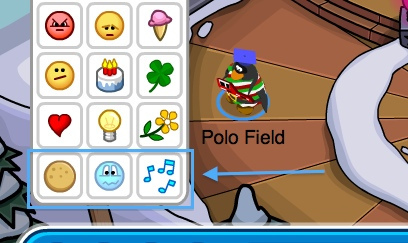 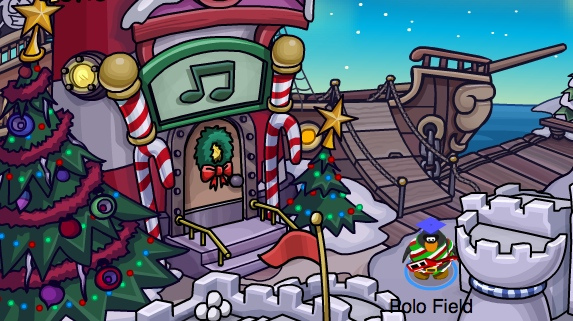 Polo Field also sent a few lucky bloggers some sneak peeks. This is the one Perapin received: 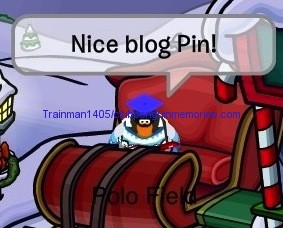 To view the full above image, click here to go to Perapin’s website. It is of the Ski Village.

Ducky908 received a picture of what appears to be the Bakery based on the fact that the machine in the picture says “Cookie Multiplier”. To view this image, click here to go to Ducky908’s website. 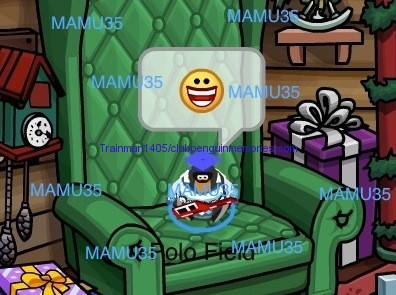 Here’s the rundown of the final video above that I originally posted as a recap.

You can buy cookies for 100 coins that go towards Coins For Change. You can become a Toy Car or if you are a member you can become a Reindeer Puffle or Frost Bite. Each transformation lasts for 10 minutes. 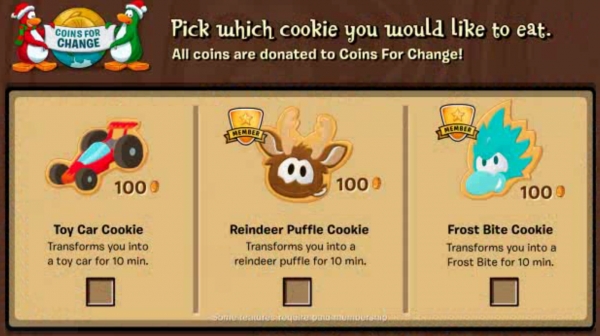 The categories to donate towards are protecting the Earth, providing medical help, and building safe places. 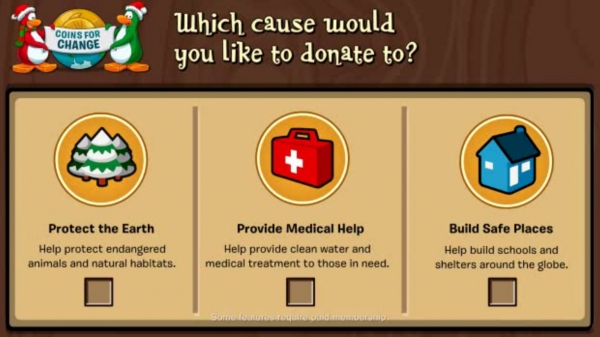 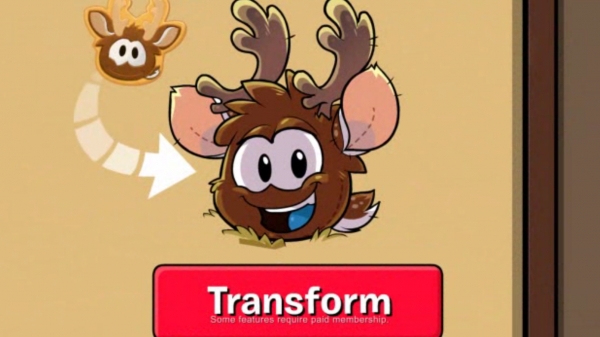 Here is Businesmoose as a Reindeer Puffle: 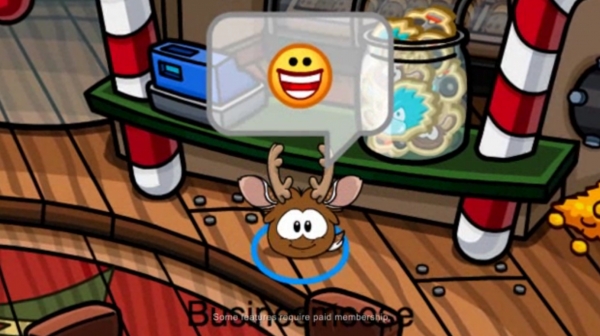 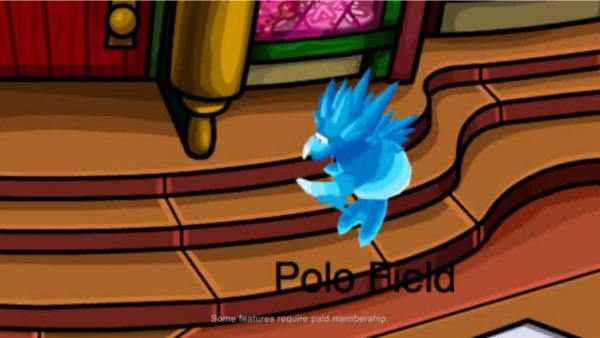 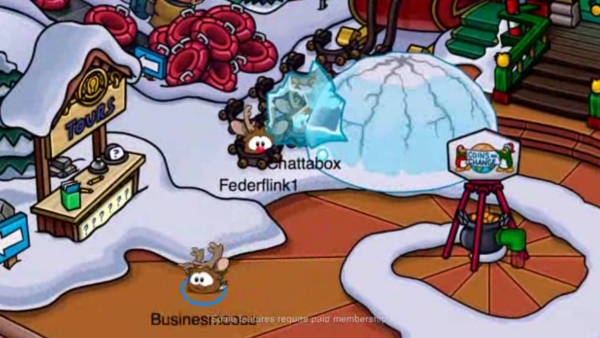 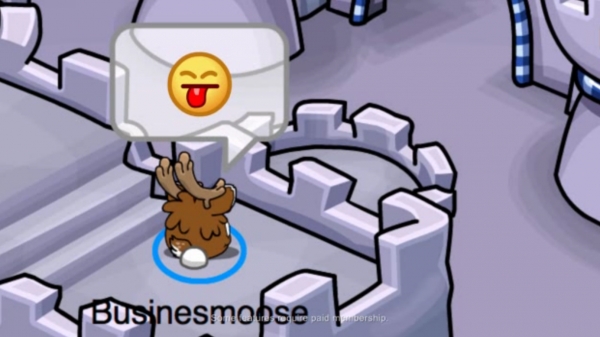 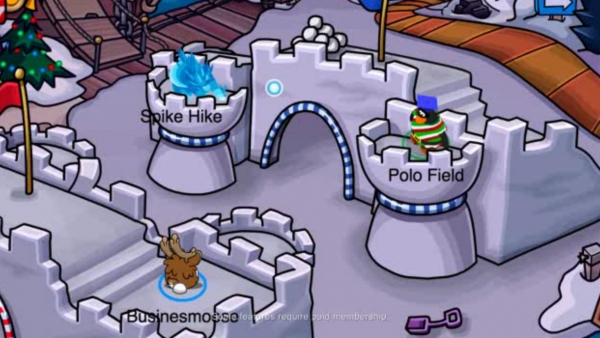 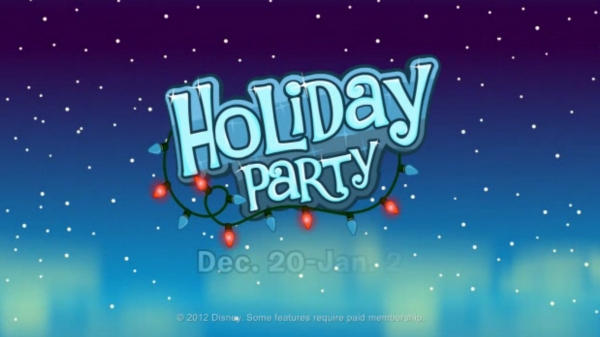 Also, some lucky penguins are receiving free one week memberships from Club Penguin in an email. Finally, Arctic White will be released at this party for all penguins.