As you probably read or at least heard about earlier, Billybob tweeted on Twitter that a new Club Penguin song is on the way, and that it’s “cool”. Why did he put quotes around the word cool?

By using the word cool with the quotes around it, chances are he didn’t mean cool as in neat, awesome, nice, etc. I and others think he meant it as a clue, meaning it has to do with something cold. Polo Field has said multiple times that Card-Jitsu Snow is not coming next month, however Club Penguin definitely has another wintery event coming up – the Holiday Party 2012. While it is roughly two months away, keep in mind that Club Penguin is always planning ahead – the bigger the event, the earlier they start. The Club Penguin team works on multiple things at once (new clothes, games, igloos, furniture items, Puffle items, features, rooms, EPF stuff, etc) so they’re constantly switching from one thing to another to meet deadlines, doing a certain amount of each thing at a time.

So with that said, I definitely wouldn’t be surprised if that song does indeed have to do with the Holiday Party or something similar. They’re just finishing up the song now and it’ll give them time to make the music video and prepare every thing else in time. 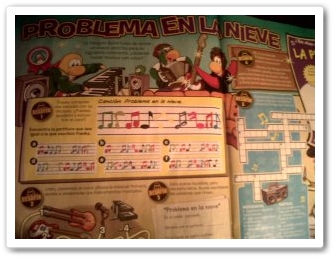 So what do you think? Will Club Penguin’s song be called Trouble in the Snow, or is it just a coincidence? Feel free to state what you think in the comments below as always.

@Trainman1405 Does Trouble in the Snow mean a penguin urinated onto the snow?

Thanks to Juanma974 for the information and OsvaldoIsaac for giving the picture to Juanma.

10 thoughts on “Is Club Penguin’s Next Song Called Trouble in the Snow?”