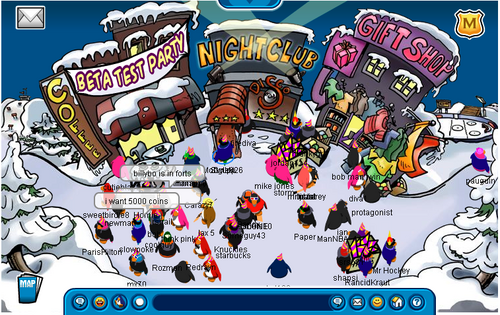 The party was just a few hours long. The real reason of this party was to see how much stress the server Club Penguin ran on could handle without crashing. During the beta, which ended October 23rd and Club Penguin launched officially October 24th, penguins had a free membership. Back then there were not tons of features compared to now and as you can see, things were very basic and simple. At the Beta Party all four of Club Penguin’s moderators (Billybob/Lane, Rsnail/Lance, Happy77/Holly, and Screenhog/Chris). (yes, lots of sites incorrectly list Happy77’s and Gizmo’s names, the ones I gave are correct) were at the party. Gizmo/Nathan was hired later for customer support. Club Penguin hit over 160 users online at a single time and over 60 kids were in the Town at once. The server even managed to hold the load.

Little known fact, the Beta Hat was given the colours of yellow and purple/pink in order to be obnoxiously coloured without hurting the eyes so not many people would desired the item if they missed the party or beta altogether – that didn’t turn out in the way Club Penguin had hoped, however.

Enough about the beta party, fast forward two years to 2007. On this day the first ever Fall Fair (as it was previously called) party launched and Ballistic Biscuit, the game at the Dock, was renamed to Hydro Hopper. It has been called Hydro Hopper ever since the name change five years ago. Just like with all other Fairs you could play games for tickets to get prizes. 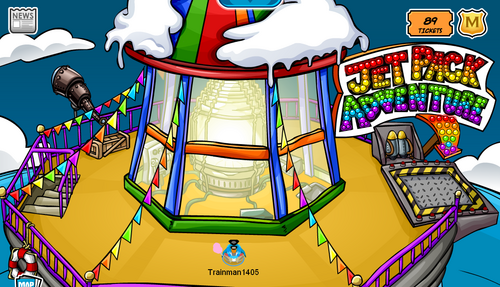