Ever since Anchors Aweigh was first found, I’ve been asked more than a few times if I know who sings Anchors Aweigh. I don’t know either, so I decided to email Club Penguin earlier this morning and ask. It turns out even they don’t know, so maybe there’s no set member of the band who sings it. 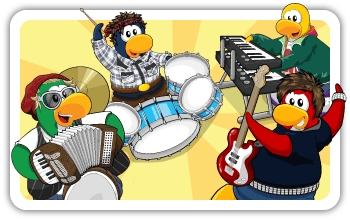 Here is the response I received from Club Penguin Support:

Hello Trainman1405,
Thanks for asking us about that new song! I’m not sure who sings Anchor’s Aweigh, but you can read about the Penguin Band here:
http://support.clubpenguin.com/help/help/characters.htm#Penguin-Band
After reading about the Band, which member do you think is the singer? Do you like the song? What’s your favorite line in it?

Well, who do you think it is that sings it? A lot of you have suggested that it is Franky from what I see. Vote in the poll below, I’m curious to see which member you think would be the vocal artist in the song.