Note: This was first posted a year ago (but I’ve rewritten it this year)

On This Day In Club Penguin History – August 29

August 29, 2008. Quite a long time ago, right? Back then newspapers were released on Thursdays and the updates were released on Fridays. The 150th newspaper was released a day before on August 28th, that means. Then that Friday on August 29th a new pin was released, the 150th Newspaper Pin. This pin was hidden in the Boiler Room on the wall on the right side of the room. The previous pin was Dodgeball Pin at the Stage. The pin after the 150th Newspaper Pin was the Magnifying Glass Pin at the Dock. 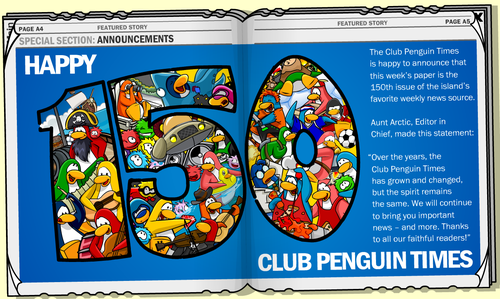 In addition to this celebratory pin and the newspaper being release the day before, the August furniture catalogue was released. (yes, that late into the month!) New items in this catalogue were the Pizza Oven, Corner Booth Seat, Straight Booth Seat, Stainless Steel Stove, Stainless Steel Fridge, and Coffee Maker. Returning items in this catalogue were the Barbecue, Coffee Couch, Coffee Table, Pantry, Kitchen Sink, Blender, and Barrel. Items that were no longer in the catalogue as they were on clearance in the July catalogue were the Inflatable Dragon, Palm Tree, Flower Planter, Princess Armoire, Princess Throne, Princess Vanity, Mermaid Vanity, Mermaid Clock, Shell Chair, Orange Inflatable Sofa, Orange Inflatable Chair, Sea Weed, and Clam.

The catalogue only had two hidden items – the Blender and the Guitar Stand.