UPDATE: Scroll to the very bottom of the post for Club Penguin’s response to this. They referenced Club Penguin Memories in it! :P

As promised, I am reviewing Club Penguin’s performance on the Retina MacBook Pro. Because of the huge screen (2880×1800 pixels, but scaled down to 1440×900 pixels) I have embedded small images in the post, but you can click them to view them in full size. Be warned, however, that each image is usually about 3 or 4 MB each. That’s a rather large image size. So if you’ve got an internet usage amount each month, be warned, it’ll eat your data!

Before I jump into it, here are the noteworthy computer specs:

That said, I’ve got a lot of the latest stuff. Club Penguin runs very smoothly on this. There is zero lag when playing the game, even after a while. The fan is silent. The computer hardly gets warm. I’m amazed – compared to prior computers I have used to play Club Penguin this is 500 times better.

Now for the screen. Retina technology is relatively new. It was added to the iPhone 4 and 4th generation iPod Touch in 2010 and came to the new iPad (third generation) earlier this year. There are other devices that support retina screens too, but on Apple’s end there are two three devices in addition to this computer. The technology is here, but it’s going to take time for developers to adopt and support these high resolutions. Until updated, images and even text will look pixelly and blurry unless “retina-ised”. Club Penguin is one thing that does not support retina. But, as I am going to state several times, since this technology is basically brand new in computers, I don’t expect them to have it soon until it gains popularity and they see a spike in traffic from such high screen resolutions.

The Retina MacBook Pro has a 2880×1800 screen resolution, but packed into the same placement as a 1440×900 screen resolution MacBook. It’s the same size but the resolution is doubled. It can be hard to explain. It’s just very high definition. After being spoiled with the high resolution and using a computer that does not contain a retina screen, I was amazed at how low quality it seemed, even though it really isn’t.

Safari is built to help upscale text on websites so it looks crystal clear. Many third party programs such as Twitter for Mac or Google Chrome do not support it yet, so text does appear a pit blurry and even pixelly when you look hard enough. Your eyes get used to it though. That said, in Safari, Club Penguin’s web pages look fine. The text is crystal clear. (in most areas) Google Chrome (my browser of choice) will get an update soon to upscale it too, but until then I’m stuck on seeing lower quality text on every website. Remember, click the images to see it in full size.

If you view the image below with Gary in it in full size and view it zoomed in (your browser will make it fit the screen, click on it to zoom in properly) you’ll notice that the text from Gary as well as things like Log Off, What’s New, Membership, etc are very clear. Gary’s image himself and the small screen button are pixelly because they are not retina. 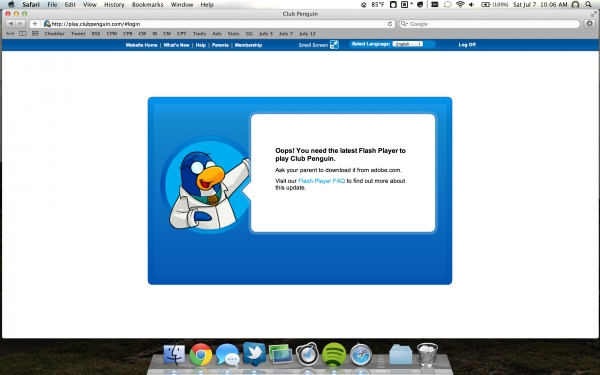 The next few screenshots are just random images around Club Penguin. The Retina MacBook Pro is meant to be run in 1440×900, half the actual screen resolution. There are a few variants, but you get the general idea of it. Below I do run my computer in its full resolution, but you’ll get to that part of the post later. Now that I switched to Google Chrome for these images you’ll see that absolutely none of the text is retina looking, unlike Safari. The whole game is pixelly across both browsers. Again, you need to view the image in its complete size to notice it. 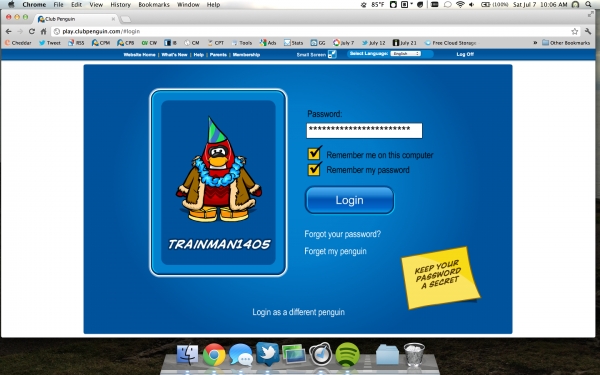 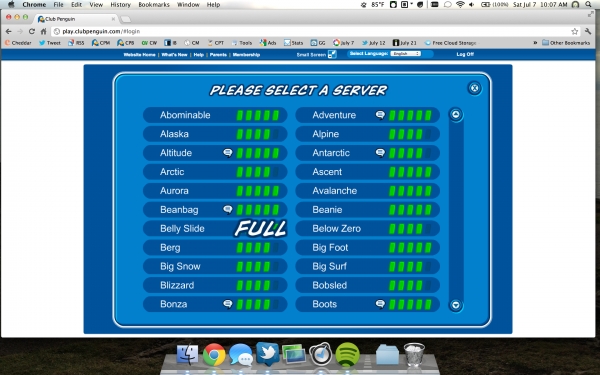 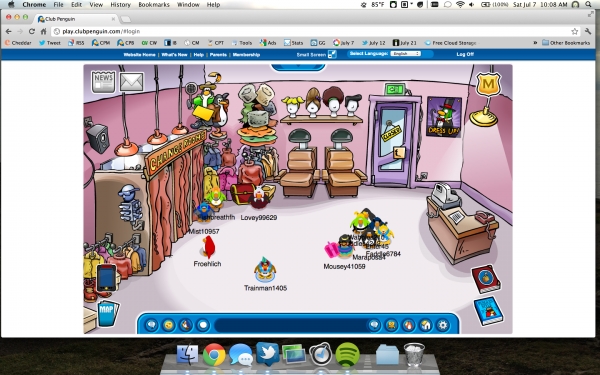 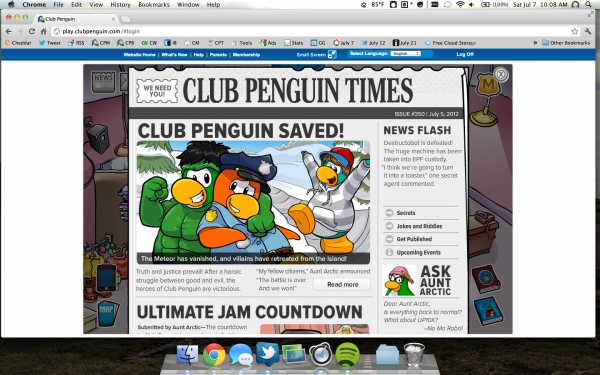 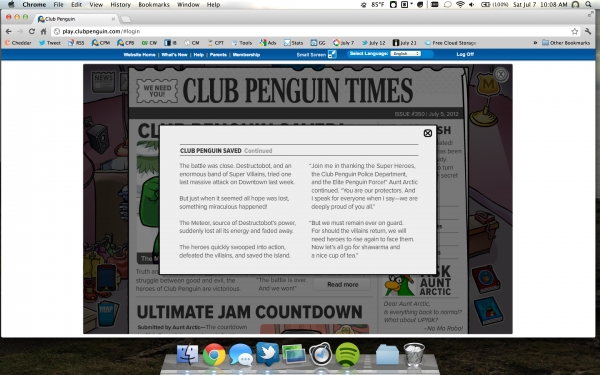 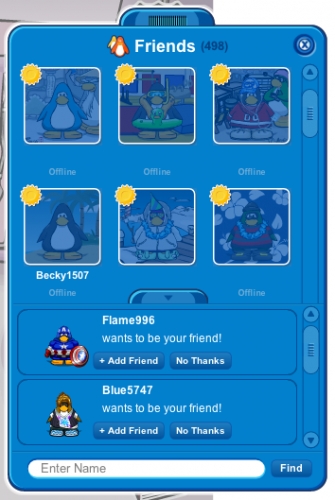 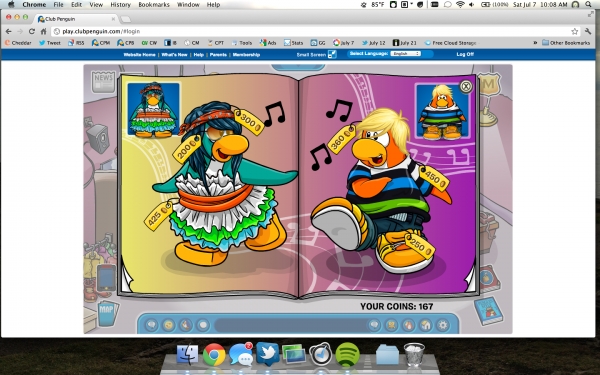 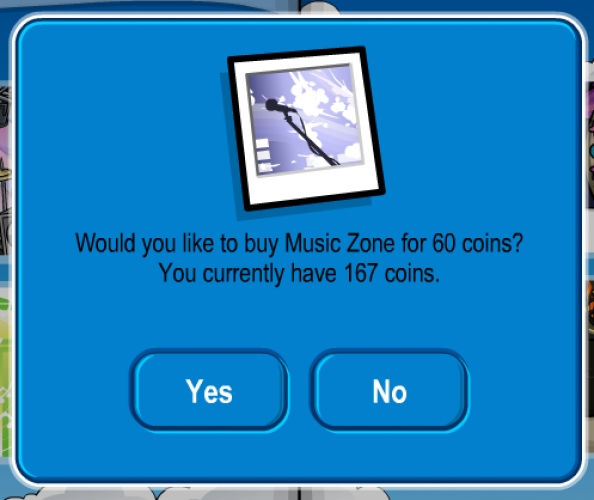 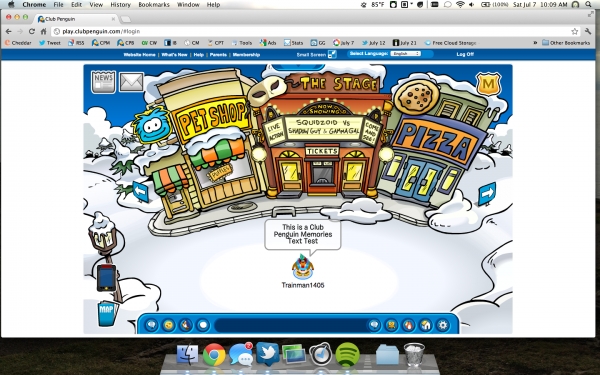 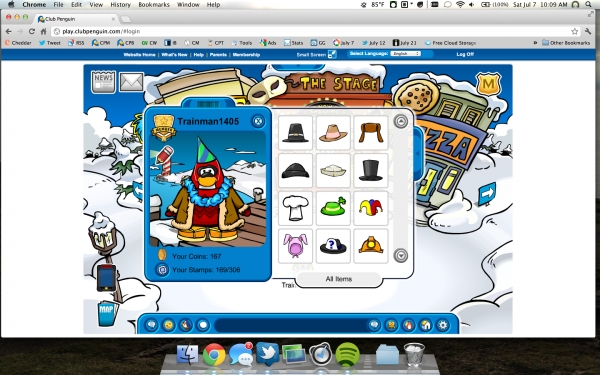 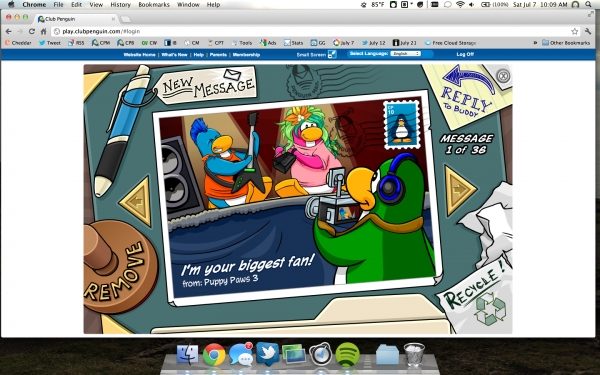 Now that’s in the 1440×900 resolution that the computer is set to run in at default even though the computer has a 2880×1800 resolution. I had to download a free third party program to run it in its full resolution. Club Penguin taking up my full screen then becomes very small in 2880×1800. I can see it fine. It’s a bit small but still playable. (That’s my friend’s dog as my background image by the way. Denny!) 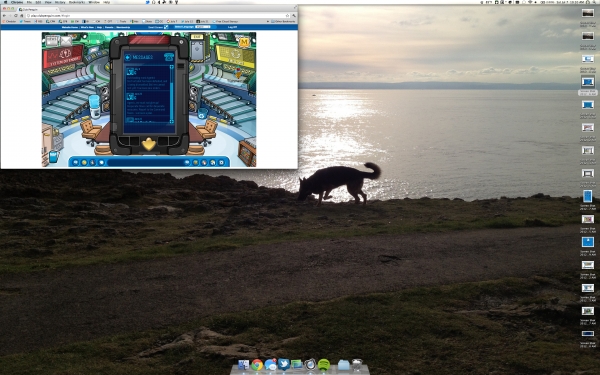 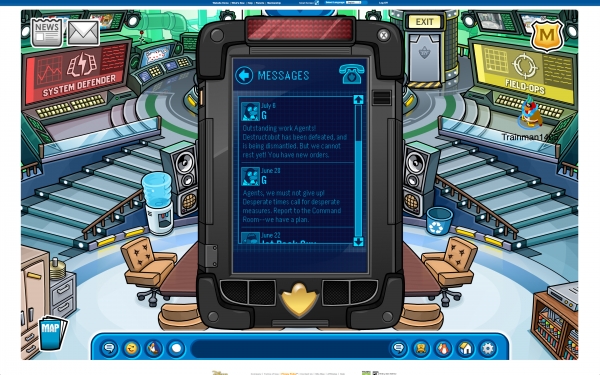 Again, same thing with the plaza but full screen and at a different resolution. It looks much clearer. 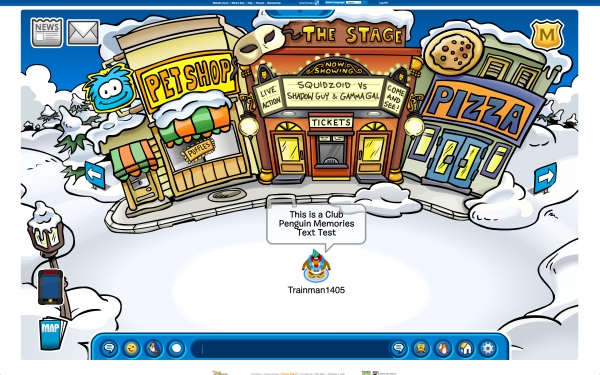 The newspaper’s text is more readable. 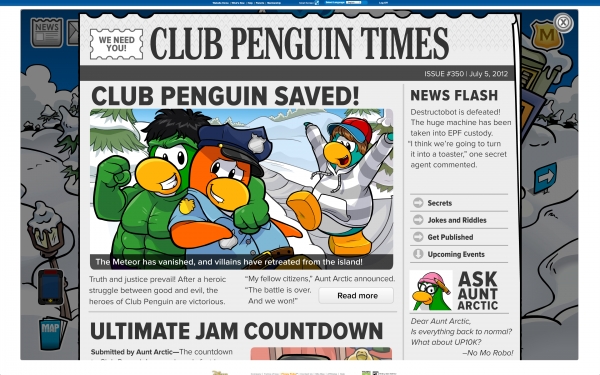 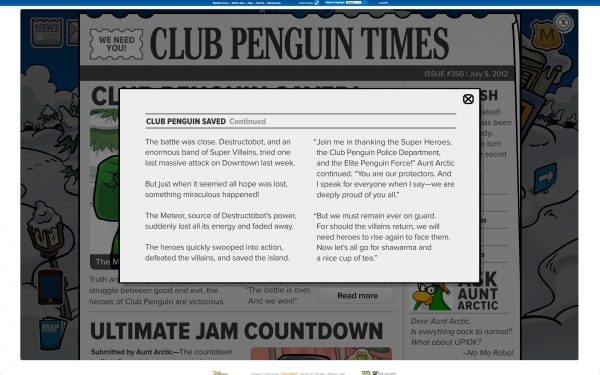 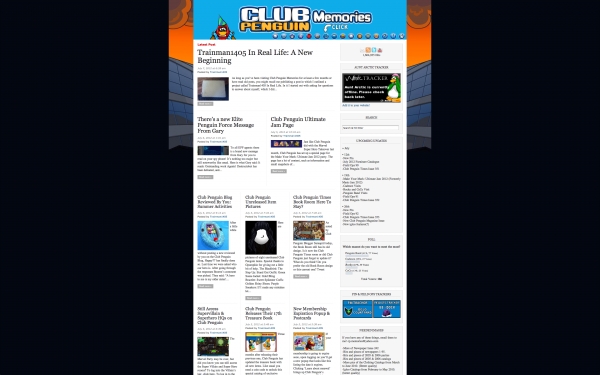 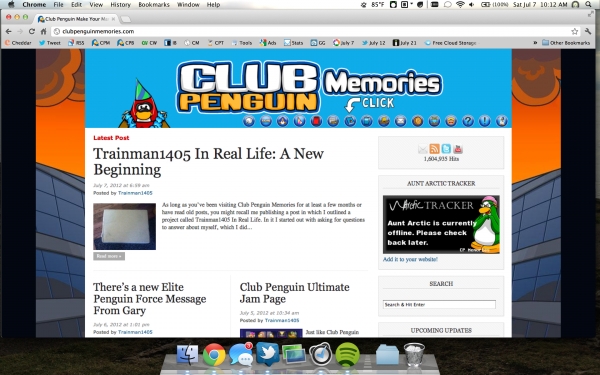 Big difference, eh? Hopefully I wasn’t too technical with this. To summarise it up, 1440×900, what the computer is set to run, makes Club Penguin look bad. But when run at 2880×1800 in full screen with the third party program, Club Penguin looks great.

Now in closing, while you cannot tell, here is the computer at 1440×900: (Sorry for the low quality pictures, the iPod Touch’s camera is terrible) 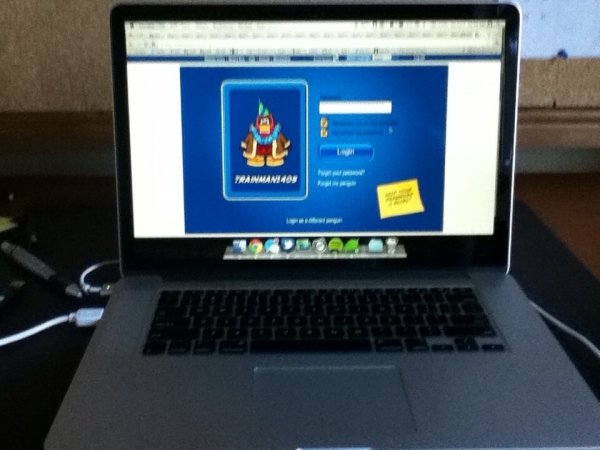 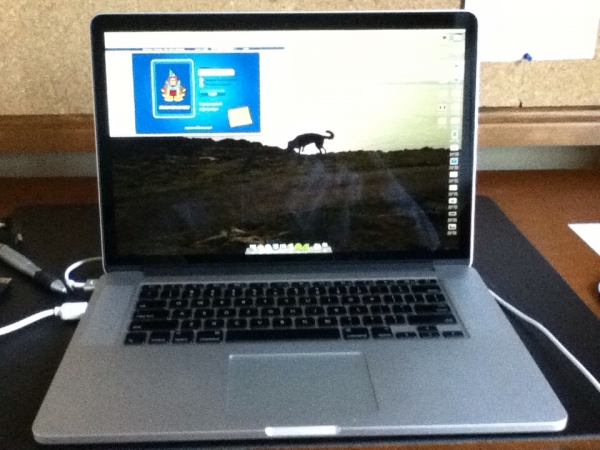 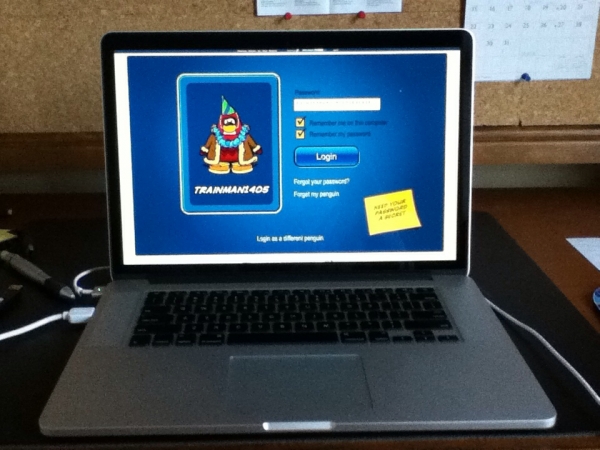 UPDATE: I had emailed Club Penguin about this on July 3rd, and a week later on July 10th heard a reply. Here is what they said:

Thank you for your email. It’s really exciting to hear that you have a Retina MacBook Pro!

I checked with our tech team, and from what I understand, when you play Club Penguin in full-screen, it should automatically scale to your computer’s resolution. If there are any issues with this, it is likely due to a limitation with Flash Player – it might not currently support the higher resolution. Whatever the case, it’s probably only a matter of time before retina displays are more commonly supported!

I suggest checking Adobe’s website periodically to see if they have a newer version of Flash Player available:

Another possibility would be to try a different browser. For example, Google Chrome has a built-in Flash Player that updates automatically, so you might have better luck with that.

I hope this information helps, and I wish you many more Club Penguin Memories (in glorious high resolution)! As always, feel free to write back any time you have a question or concern.

Lol it’s pretty cool they referenced Club Penguin Memories in the email – not once did I mention this website to them in my original email! I believe it is a limitation with Flash Player. Oh well. I appreciate their response, and here’s to many more  (high resolution) Club Penguin Memories. ;-)