Here’s a quick little something. This Puffle looks like a raccoon, no? It has ears and a tail. It’s at 90 seconds into the video. (Thanks Antártidaa, Blakefilms13, and Summerkate88) 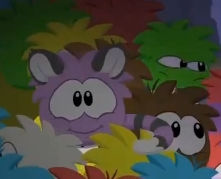 Update: While I cannot confirm any of this, here’s a little interesting something from Club Penguin Factz.

I have phoned CP about this. Even they have no idea what it is (though I have a good idea they are lying). They did tell me though that they are planning something called Puffle Costumes. Maybe they may launch a line of plushes to go with them.

Next, I pushed my luck and asked about the Super Hero Party.  They said it is super duper secret but the lovely person gave me a hint, which is that it is something UNIQUE and it is said to be an epic party. I suspect that the play, Squidzoid VS Shadow Guy and Gamma Gal, will be making a return to the stage during the party.

And if you missed the Penguin Play Awards they told me it is something which should come back very soon… hurray!