As long as you played Club Penguin in April 2010 or April 2011, chances are you’ve heard of the Earth Day Party. It’s a small island celebration that takes place alongside Earth Day in the real world and is about the environment. Here is a room from last year’s Earth Day Party: 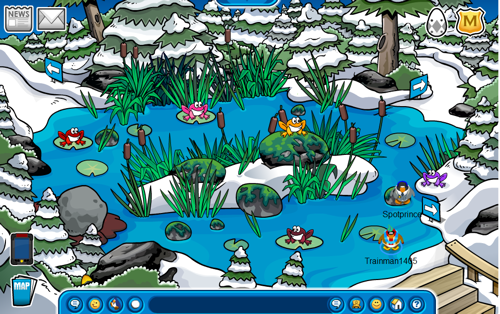 Today I read a quote over on the Kelowna (where Club Penguin is located) News website Castanet that caught my eye, as it’s related to Club Penguin. Here it is:

Club Penguin is just one of many businesses committed to lending their support to the cause.

“As a company, we have a lot of actions planned as a lead-up to Earth Day (April 22) and no job is too small,” says Club Penguin team leader Rob Mason-Brown.

Now, it could mean in the game or outside of the game in the real world, as the article does mention “Club Penguin will clean up an area around the Landmark Building.” What do you think? If it’s for in game, what do you think Disney’s Club Penguin has planned for us this year?

4 thoughts on “Club Penguin To Have Events Leading Up To Earth Day Party 2012?”