Note: This is nothing but the author’s (Trainman1405) viewpoints and opinions. It does not necessarily mean what he says is true, he’s just sifting through the information and giving his take on it. Nothing of this is said with 100% certainty, for all I know this could indeed be real, as doubtful as Trainman is about this.

For the past month or two, there have been murmurs around the web on some Club Penguin websites, mainly the Club Penguin Wiki, about a whole upcoming thing related to the Elite Penguin Force, revolving an up and coming EPF Recon Team, the Sports Shop returning, and a whole bunch of other stuff as a result of it. I personally believe none of it, it just does not seem right. In this post I’m going to talk about all the information that has supposedly been said about it and say why I don’t believe in it. Remember, just because I say this stuff, it does not mean I am right! I am just voicing my personal opinions about it, as I stated in the disclaimer at the beginning of this post. 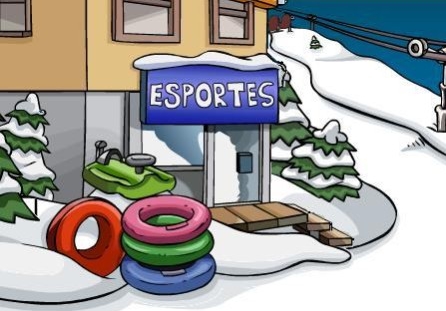 That image is what started it all, really. The Sports Shop is on the other site of the Ski Village, where it will supposedly be rebuilt. Why there? I don’t know. Why is it in Spanish? I don’t know. Where is this image from? Again, I don’t know – however it looks like it was taken from a PSA mission. It could also very easily be an edit, as the Club Penguin community has created very lifelike edits in the past If you look around the right side of the door and along the steps and stuff you’ll see white pixels, which leads me to believe it could have been copy/pasted right there in the image to make it look like the Sports Shop is really there. I’m not buying it. I will state that the Sports Shop is still listed in Club Penguin’s room file, however. That is it.

Adding on to this, a magazine supposedly said “The Sport Shop Rebuilt has been confirmed in a Canadian magazine as a party to rebuild the Sport Shop”. Hmm? Which magazine said this? Because no name was given, let alone pictures of this article were posted, it seems highly unlikely a magazine actually published information about this – let alone this early, when Club Penguin gives information about an upcoming thing in a magazine it’s published a month or two before it happens.

A user over on one of the Club Penguin Wikis also supposedly got an email from his uncle. This is what was supposedly received:

Hello! We’ve just finished up working on the brand new multiplayer game for Elite agents! This game includes multiplayer and co-op team battles and action packed levels. Guide your fellow Elite Penguin Force agents into the field and control vehicles such as dune buggys, helicoptors, and snow trekkers to save the island from robots. Handle new weapons such as lasers, snowball blasters, and more. This game will be done on a total 2D interface and will include boss battles, communicator, and all-new features.

-Navigate strange new territories on the island and command your team into the fight against Protobot.

-Defeat the enemy robots and take out your weaponry for the fight.

The Elite Penguin Force Recon Team are a select group of special agents assigned by the Director himself, and briefed to perform special tasks crucial to the survival of the agency. In EPF Recon Team, it is your job to defend the island from Protobot. We are counting on you. Herbert may have escaped hibernation, but with your intelligence and strength, we can apprehend him once and for all!

This game will be released in August of 2012. I wanted to hear your opinion on this.

It just doesn’t seem like Club Penguin would be doing something like this, so I am not buying this information either. Also, Club Penguin employees are NOT supposed to give out information. Only people like Happy77 and Billybob do via Club Penguin YouTube Videos & blog posts. Also, Club Penguin definitely wouldn’t finish something up months in advance, up until its release date are they critiquing it. There would also most likely be something in Club Penguin’s files about this if it was indeed ready. There isn’t.

Perry, the one who received the supposed email from his uncle, said this:

I received an email from my uncle that has exclusive information on a brand new mini game coming to Club Penguin in July 2011, which would coincide with the new EPF trading card game. Well, the game needed some more work, and has been confirmed for an August 2012 release. This is to coincide with the release of a MAJOR update for secret agents, including a Rebuild the Sport Shop Event. Here is the email I recieved from my uncle! I have permission to leak information.

Club Penguin The Movie: EPF Recon Team is an upcoming Disney Channel Original Movie based on Club Penguin. The movie has a release date of late Winter or early Spring 2013. The movie has been conformed in an email from Club Penguin. The movie will be made by Walt Disney Pictures, and will be premiering on the Disney Channel. The movie revolves around Agents Crash and Rex saving the island from Herbert and his robots, and a dark force threatening to destroy the island itself. We will be hearing Herbert, G, Dot, Rookie, and Jet Pack Guy’s voices for the first time.

I really don’t think there will be a DCOM on Disney Channel, as I really don’t think it would get a ton of viewer-ship compared to regular “real people” movies, such as one with someone such as Debby Ryan. (Like her recent Radio Rebel movie) I don’t watch Disney Channel that much, but do they even have animated Disney Channel Original Movies? I know they have a few animated TV shows… (such as Fish Hooks) The article about the movie was deleted off the Club Penguin Wiki.

Another thing – on the Club Penguin Wiki page it says “The Sports Shop will return in 2012 because of a sneak peek image and video.” Hmmm? What video? I’ve yet to see one.

Other websites have reported information such as “There will be a free item, the Recon Headset, during the construction event in late July 2012.” July 2012? But the stuff above says August 2012 for everything? This information just is not consistent.

There are also bits and pieces of other shady statements around the web that I won’t bother to mention, as I think by now you get the idea. I’m just not believing this. Maybe some of this information will come true, but for now I just think it’s only going to be Operation: Blackout. I guess we’ll find out if any of these claims are true within the next 5 to 6 months, eh?