Late yesterday Billybob made a post on the Club Penguin Blog letting us know that this Friday, December 2nd, Rockhopper (as well as Billybob himself) will be in New York City in Times Square! 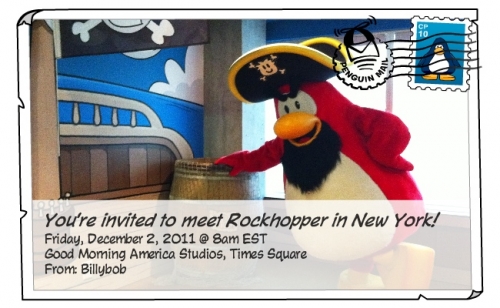 While he did not say they reached their goal of 100,000 submissions, he did say they reached thousands and thousands. Are you going to New York for the event? Billybob mentioned that if you do, be sure to bring a coat to donate! Also, the first 300 people to donate a coat will get a Club Penguin plush toy – who knows, maybe you’ll get a Green Viking Helmet code too? I will be recording the television broadcast (hopefully in HD quality) and uploading it to YouTube or elsewhere. That way if you’re in school or are unable to record it yourself, you’ll be able to view it!