Hooray! The 2011 Halloween Party has been released on Club Penguin! 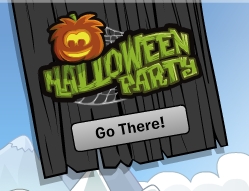 At the Haunted Mansion all penguins can pick up a free Ghost Costume…too bad I bought mine for 1,000 coins in 2006.

Members can pick up a lantern in the Dark Chamber. 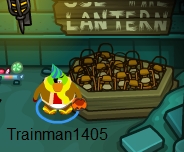 Members can also pick up a free Swamp Monster Costume in the Monster Room. 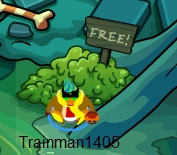 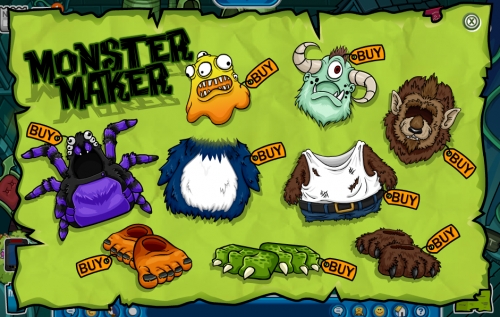 There are two hidden items in this catalog. Click the M in “Monster” for the Mummy Costume, which costs 600 coins. 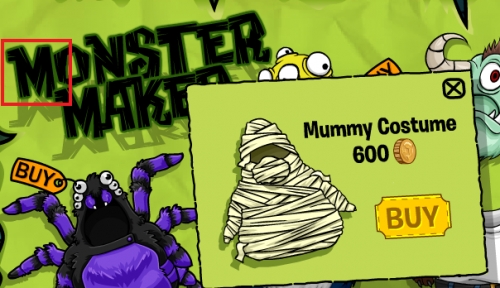 Click the K in “Maker” for the Raven Wings, which costs 300 coins. 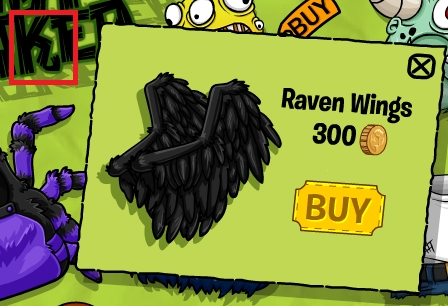 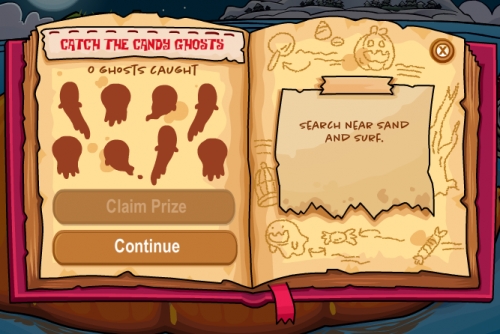 The first clue is “Search near sand and surf”. Go to the cove next to the surfboard for the first candy ghost.

The second clue is “Head to a spooky house”. Go outside the Haunted House entrance for the second candy ghost. 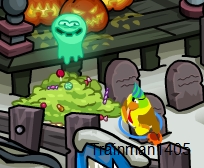 The third clue is “Make your way to a wooden shack”. Go to the Mine Shack by the community tree for the next candy ghost. 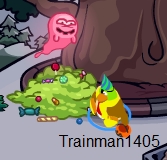 Almost halfway there! The fourth clue is “Find a popular spot for tour guides”. Go to the Ski Village. Where the Tour Guide booth usually is you’ll see the next pile of candy. Click it for the fourth candy ghost. We are now halfway done with the scavenger hunt. 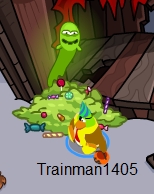 The fifth clue is “Seek out a snowy slope”. Go to the Ski Hill, also known as the Mountain. You’ll see another pile of candy. Click it and the candy ghost will appear. 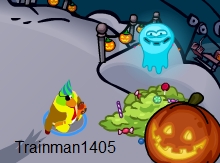 The next clue is “Wander into the woods”. Go to the Forest. There you will spot another candy pile. 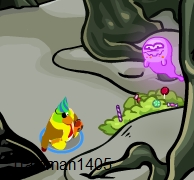 The second to last clue is “Look toward a tower of light”. Go to the Beach for this one.

The final clue is “Be on the lookout for a boat”. Go to the Dock behind the pumpkin patch for the final candy ghost.

Now that you’ve finished the scavenger hunt you can pick up the Candy Ghost Background. 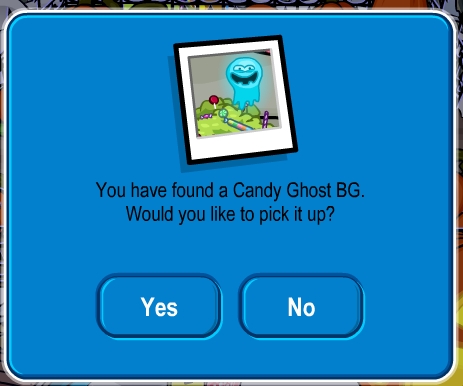 Here is a video of the scavenger hunt:

Penguins can access the Haunted House, Dark Chamber, and Secret Lab from the Forest. 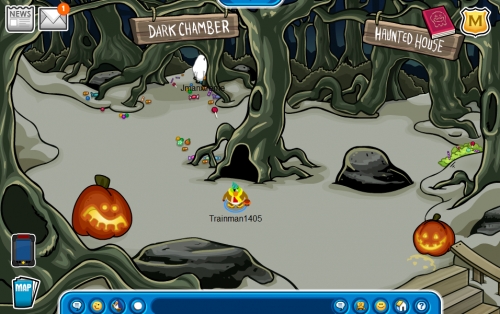 As mentioned above, the Haunted House contains the Ghost Costume. In this room click your mouse on everything! 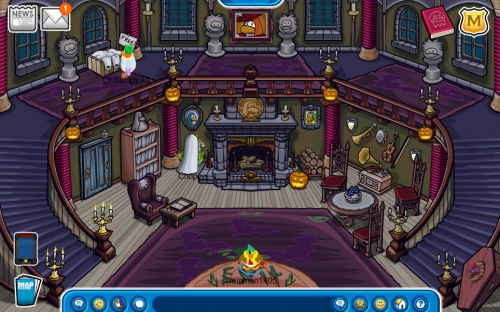 You can access the Secret Lab from outside the Haunted House. 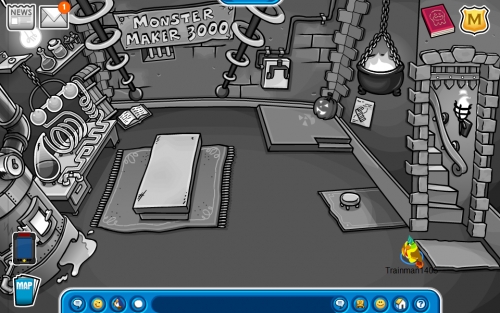 The Dark Chamber is a maze. You’ll start out at the Dark Swamp. 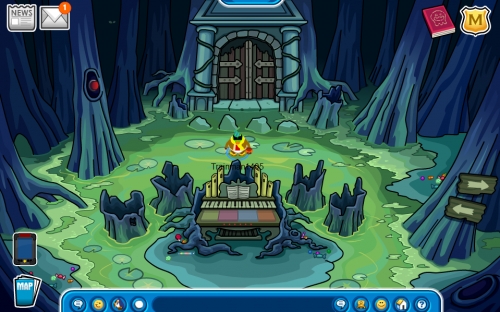 You need to unlock the doors by matching up the sounds on the pipe organ. From there you’ll be in the Dark Chamber. Wear a lantern or the Spy Goggles. 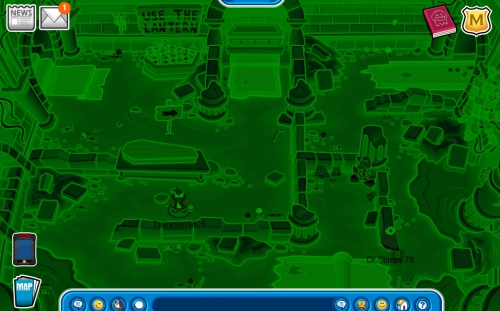 After that Dark Chamber room you’ll be in a new second one. 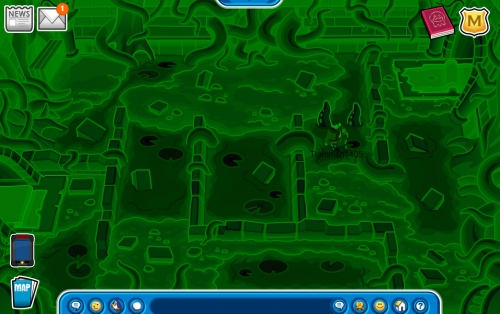 Once you find your way through the Dark Chamber you’ll be in the Monster Room. You can get the Swamp Monster Costume as well as purchase items from the Monster Catalog. 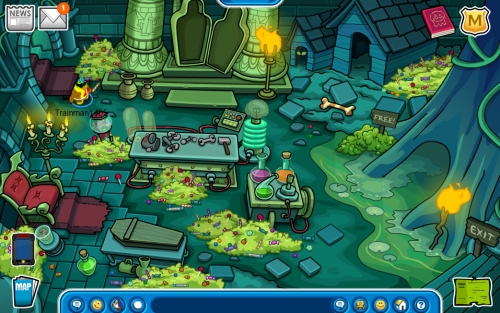 Here’s a video of the Dark Chamber Maze:

At the Halloween Party you can earn nine stamps:

Gary has also arrived. This is his new background: 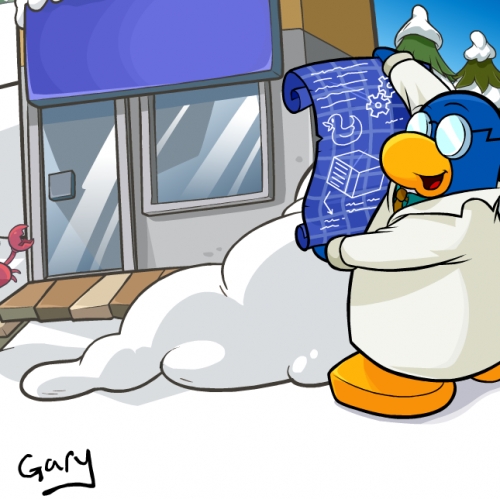