Popular magazine publishing firm Beckett has included an article about Club Penguin in their most recent issue, giving away a lot of information on what to expect. I’ve already found out some information, including the Monster Mash stamp will be unlockable (already is, actually) and a whole list of clothes that will be either in the catalog or Halloween Party.

Now I’ve got even more information about the party. A whole lot more. I received a comment from Sadas who told me about the magazine. You can read it below:

The entire island is transformed for Club Penguin’s annual Halloween Party. This year, for the first time, everyone can venture into the Forest to explore the Haunted House! Get in the spirit with a free ghost costume, and trick-or-treat at spooky igloos to earn a rare party Stamp. Find and catch candy ghosts on the new Halloween scavenger hunt for a special surprise.

At the Stage, you can re-create the Halloween classic Night of the Living Sled. Or head to the Ski Village with some friends to show off your scariest and silliest Halloween styles. If you’re up for a creepy challenge, visit the Cove and stop in at the Monster Catcher HQ or share epic ghoul catching stories around the fire.

Members can decorate their igloos with all the Halloween styles and dress up as unicorns, werewolves, or slimy swamp creatures. There’s a brand new maze in the Dark Chamber where members can discover a mysterious monster maker room with a very creepy catalog. And starting in October, members will be able to dress up their Puffles with hats!

…not only that, but you can see the page in the magazine: 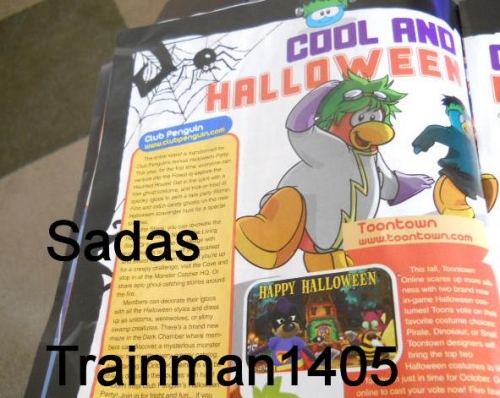 To sum it all up:

Awesome! I can’t wait until it’s October, as it seems like it will be a promising month on Club Penguin! Thanks again for the awesome information Sadas!