Today my friend Pengumile tweeted something interesting that I thought I would share with all of you. Take a look:

He’s basically saying that he thinks the unused arcade game at the Dance Lounge will most likely be the real/fiction Club Penguin Beta Team Rollerscape game that Happy77 uploaded to her YouTube channel about two weeks ago. If you watch her footage, towards the end it does look like an arcade game. Here’s the video, in case you missed out on it: 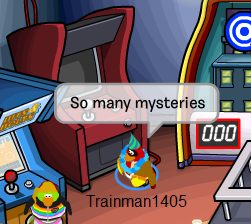 Anyway, vote in the poll below with what you think!

UPDATE: I’ve found confirmation on her YouTube channel that it indeed will be a game.