There is rumors going around the Club Penguin Community that Rookie is online. I personally haven’t seen him, however there is evidence that he may be – and I don’t mean the Safe Chat messages that everyone has posted about.

Back in the January I was looking in Club Penguin’s files when I saw this:

In that picture, where it says “ids”:[]}”, it doesn’t list any penguin ids for him. However, it was recently added and the penguin Rookie now has an actual penguin id. Take a look:

However, he has no background to give out.

I also called Club Penguin a few hours ago. The representative I spoke with said something along the lines “There has been reports of him on Club Penguin, but I haven’t seen him. However, I think he is.”

Then as I said above, there’s these safe chat messages: 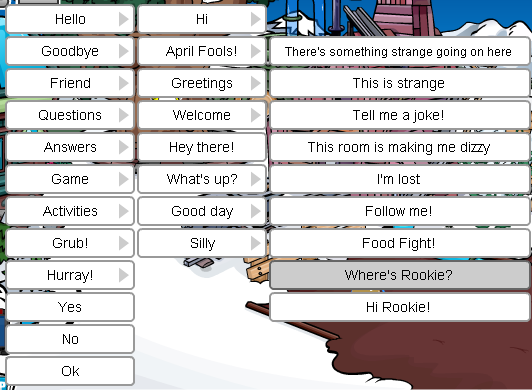 If he really is on Club Penguin, be sure to check out our Rookie Tracker!