The Coffee Shop is another one of the first rooms to be in Club Penguin. Here you can play Bean Counters, which has been in the game since the start of Club Penguin. You can also enjoy a nice fresh and warm cup of coffee or head to the Book Room. On August 30, 2012, a new room design was released alongside the new Smoothie Smash game. On February 28, 2013 the room was updated with a temporary joke telling corner for Red Nose Day. 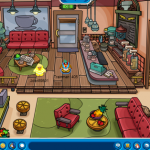 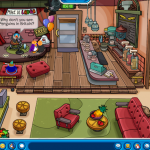