On the 26th of April Club Penguin has updated in 2011, 2012, and 2013. In 2011 the Ice Fishing, Pizzatron 3000, and Cart Surfer games were updated. In 2012 Ruby and the Ruby was being performed again at the Stage, log out screens were added, the postcards were updated, and the 79th field op mission was released. Then, most recently in 2013, a new item was available at that year’s Marvel Superhero Takeover.

On this day in 2011 Club Penguin updated three of their games. Ice Fishing, Pizzatron 3000, and Cart Surfer all received updates. The three games had a new modernised title screen that you see when the game first loads. Ice Fishing and Pizzatron 3000 also now contained stamps for players to unlock. 10 stamps were added for each game, totalling 20 brand new stamps. This brought the overall stamp total at the time to 286. 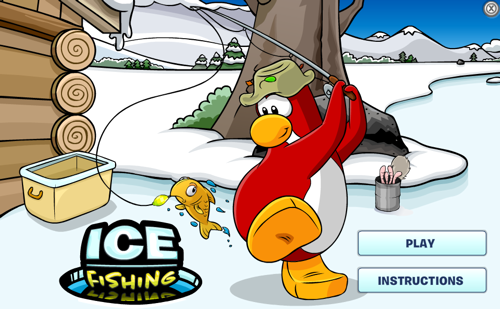 In 2012 Ruby and the Ruby was released at the stage again, making it the fifth showing overall for this particular production. This stage play was first released in September 2008.

Also on this day in 2012 Club Penguin released their first ever log off screen. Instead of being redirected to the homepage of Club Penguin when clicking “log off”, it now took you to a special page with a Club Penguin related advertisement, such as explaining what benefits membership comes with.

Also on this day in 2012 the penguin mail postcard selection was updated to re-add the Find the Pin, Ruby and the Ruby, and Actors Needed postcards.

The final update on this day in 2012 was the 79th field op mission being released. You had to go to the Pizza Parlour, step behind the counter, then crack the lock in the mini-game by listening to the tempo and repeating it.

As for 2013, there was one update. At that year’s Marvel Superhero Takeover you could now build a new robot and also, if you were a member, collect the Force Wave Power Gloves.