At Rockhopper’s Quest in 2012 players boarded his ship The Migrator and went on a quest across the sea to several different locations such as Dinosaur Island and Shipwreck Island. You know that red dot you see in the telescope at the Lighthouse Beacon? It’s a shipwreck beacon on Shipwreck Island. During the quest we put it there. 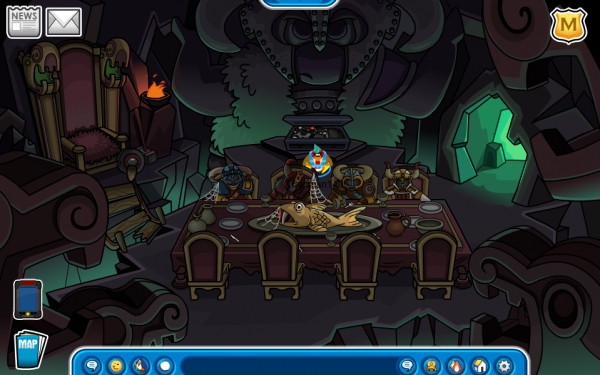 Along with the quest Club Penguin hid a new pin, the Helm Pin. It was located at the Ski Hill. It is Club Penguin’s 196th pin overall and is the sixth pin to be hidden in that particular room.

The final update in 2012 was the 70th field op being released. It was located on Shipwreck Island. The mini-game to complete the mission was to power the chipset by guiding the micro battery.

As for 2013, there was one update. The Gold Award item was now available for members at the Hollywood Party’s award show.

There was also one update in 2014. The Blue Balloon Sword item was now available for all players at the Fair’s prize booth. It cost 1,500 tickets.