On this day in 2012 Club Penguin had more than ten different updates! Wow! There were new catalogues for the month, new room designs, and much, much more.

The first update in 2012 was December’s edition of the Penguin Style being released. The catalogue featured new outfits such as the Nutcracker Costume and also contained some winter wear to stay warm. Clothing wasn’t the only holiday related update, as A Humbug Holiday returned to the stage for a second time, the Stadium switched from the Soccer Pitch to the Ice Rink, and along with that change the sports catalogue was updated to contain brand new bobsledding items as well as return the ice skating and hockey outfits. 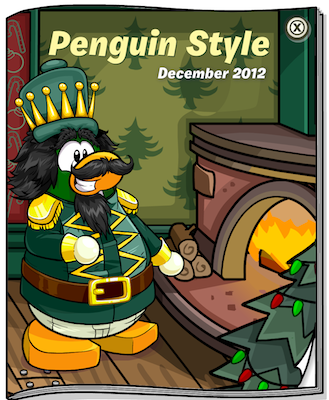 Another big update that took place on this day in 2012 were rooms gaining new designs. Penguins said goodbye to the old looks of the Town, Plaza, Snow Forts, Ski Village, Dock, and Beach, and hello to the new designs – the ones that are being used today.

There were also many minor updates on the 6th of December, too. The postcards were updated with holiday themed ones, Rockhopper was spotted in the telescope coming to the island, there was a logoff screen advertising Cool in the Cold, which was Club Penguin’s new song, a new login screen advertising the upcoming Holiday Party, Club Penguin’s homepage got a new design, the one you see now, and PSA missions were added to Club Penguin’s fun stuff page. The PSA missions were removed from the fun stuff section in June 2015 and put back on Club Penguin as EPF training missions.