On the 15th of October there’s only been updates in 2010. Two updates were launched, both of them igloo related. The new furniture catalogue for the month was released and that year’s Halloween Igloo Decorating Contest kicked off.The furniture catalogue for the month of October contained new items such as the Spooky Penguin Statue, Torn Carpet, and Pile O’ Candy. Items such as the Jack-O-Lanterns were brought back. The igloo upgrades catalogue was not updated. 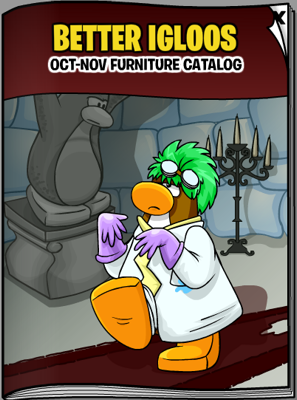 As for the igloo contest, Club Penguin continued their yearly tradition that is no more. Members could decorate their igloo with a Halloween theme, submit it for judging, and, if lucky enough, win a prize for their penguin!