Over the past three weeks while I’ve neglected blogging, Meggbot posted a grand total of 21 different time warps on the Club Penguin Blog. The time warps show different concept drawings throughout Club Penguin’s past. Some were turned into reality, others weren’t. If you’re a history buff like me, you especially won’t want to miss out on this!

First, a few of my own comments on these:

Now, here are all 21! #18 is where Meggbot begins to malfunction.

We dug WAY back for this image. It’s from an archived Screenhog notebook—some really early penguin model explorations. 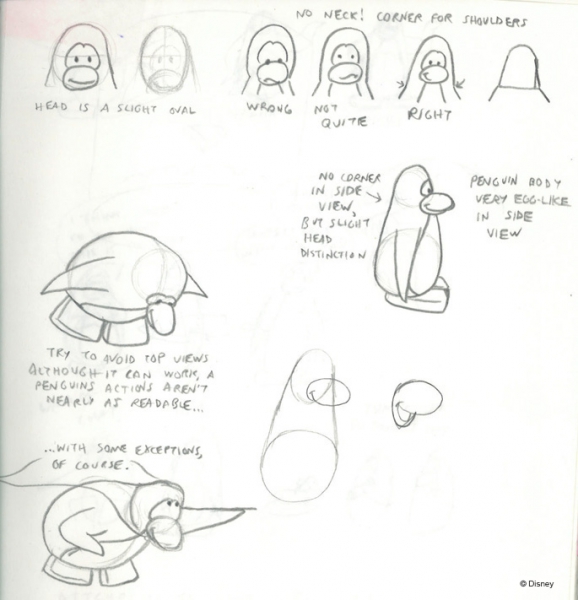 From the paper archives, here are some sketches from one of the early Stage plays (December 2007) — the Twelfth Fish!

Although Rookie edited the play in January 2012, the original lines included parodies of a variety of Shakespeare plays including, “To fish or not to fish, that is the question!” 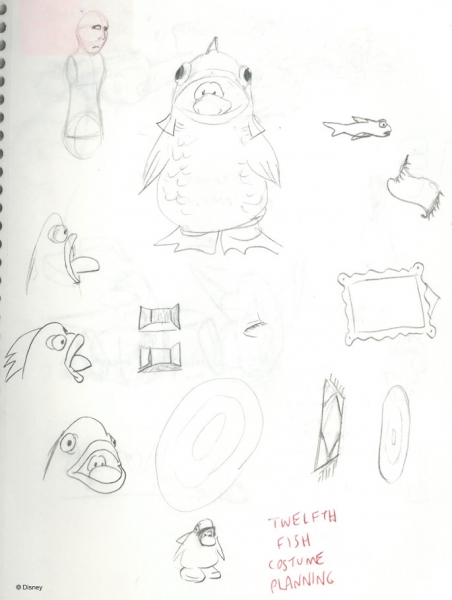 The first concepts of the DJ3K game included thoughts of Gary mixing tracks! Here are some really early drawings and ideas the team had about the game. 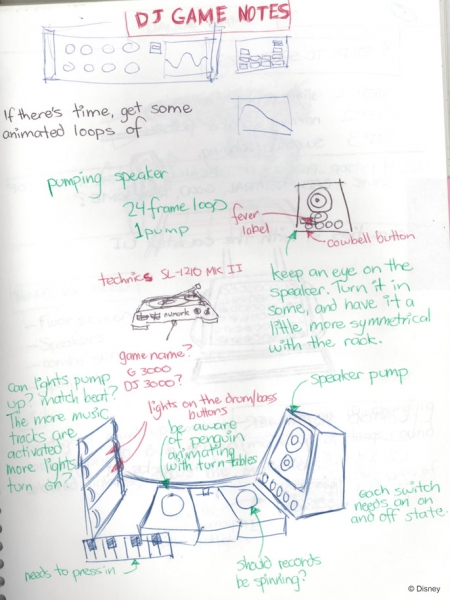 Thankfully, right off the top, our team wanted to make sure that pet puffles would have their own furniture. 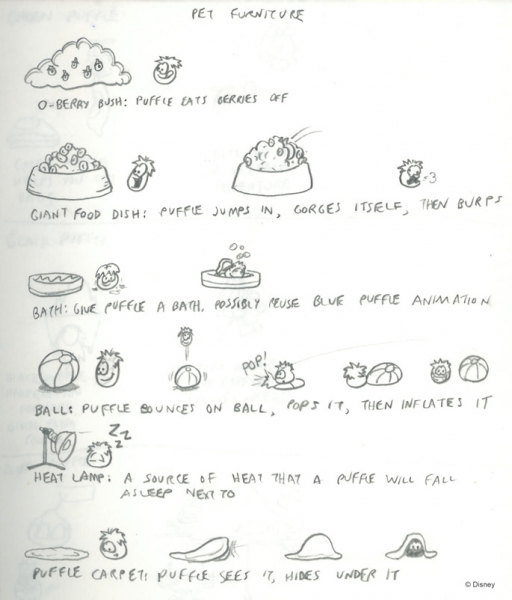 #5 – What if We Could Have Puffles in Games?

So many ideas are first concepted on paper in brainstorm meetings. It’s really awesome to go back on some of these drawings now! Early on the team thought it would be amazing if penguins could take puffles into games.

Do you take your pet puffles into games to help you or earn extra coins? 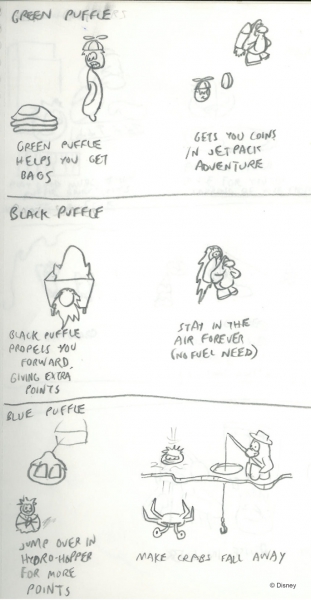 Okay. The team thinks this is super cool that one of the artists kept such great notes on the party brainstorms.

Keep in mind that LOTS of the ideas we have never actually happen (because we have way, way too many ideas to actually make them all) but these notes on our camping party from 2007 seemed really fun. Now I kinda want to go camping…

What’s your favorite party of all time? 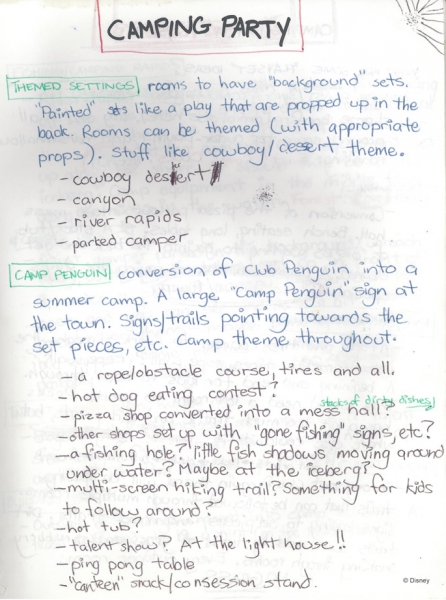 Dance Contest! Here are some early notes and rough sketches of what the Dance Game started out like. It was released January 2009.

PS. The team was SO excited to finally get DJ Cadence on the island so penguins could meet her. That happened in February, 2011. Here’s an early description her:

“Passionate singer, epic choreographer… DJ Cadence loves to express herself and be the center of attention, taking the party wherever she goes.”

Have you ever met Cadence online? 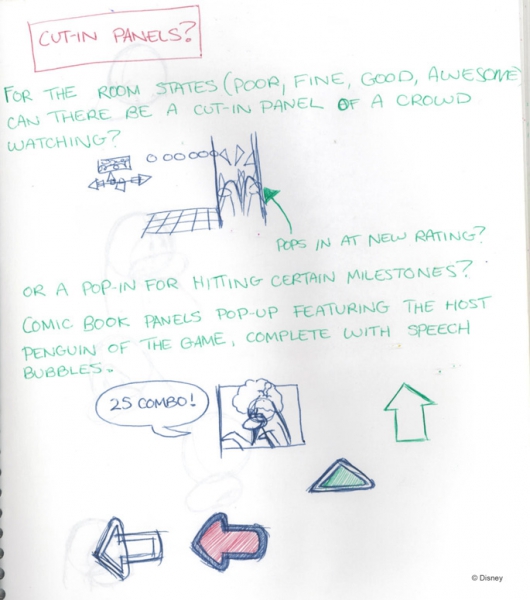 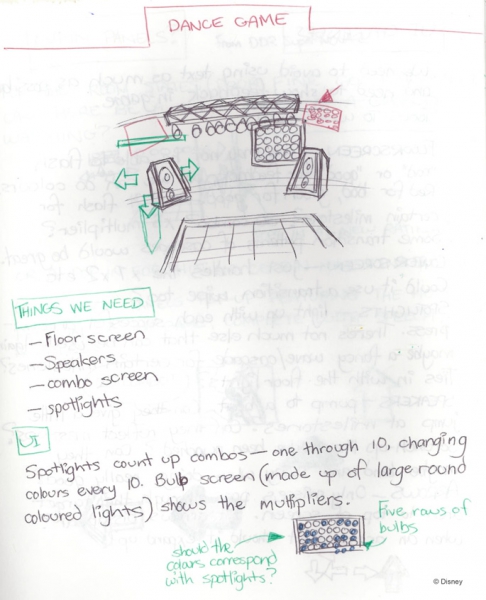 One of our artists really developed the character of Extreme Penguin. Here are some early notes and drawings.

What do you think? 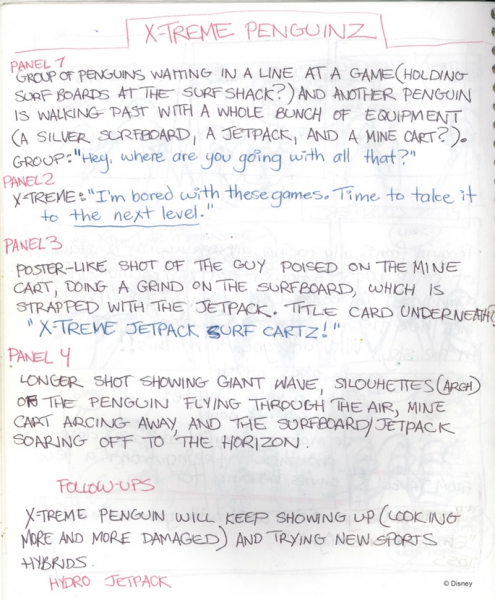 Here are a few to enjoy! 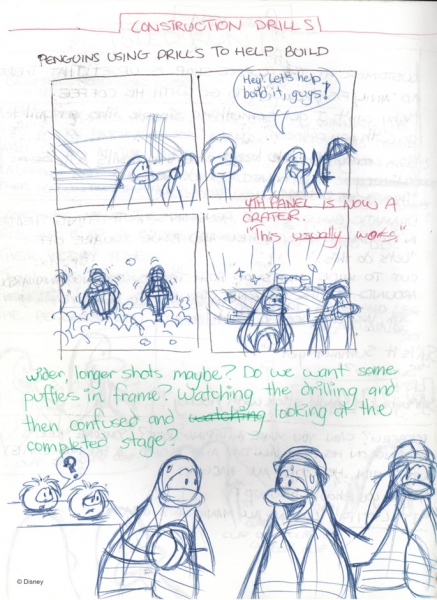 Wow have these musicians come a long way!

Check out some of the earliest concept sketches for the Penguin Band. 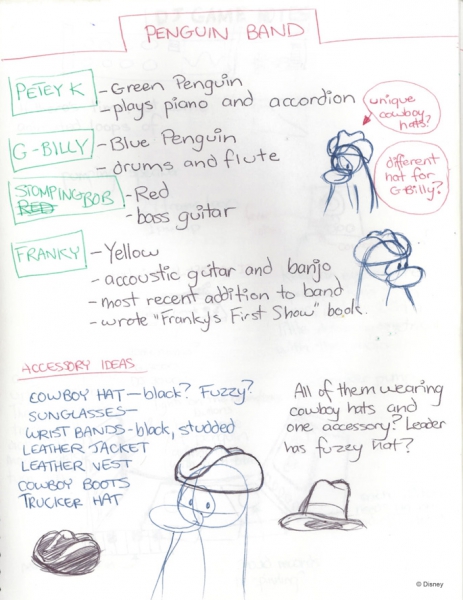 Way back when, Waddledodds did a piece of key art that made the team really excited to get into making Card-Jitsu water. 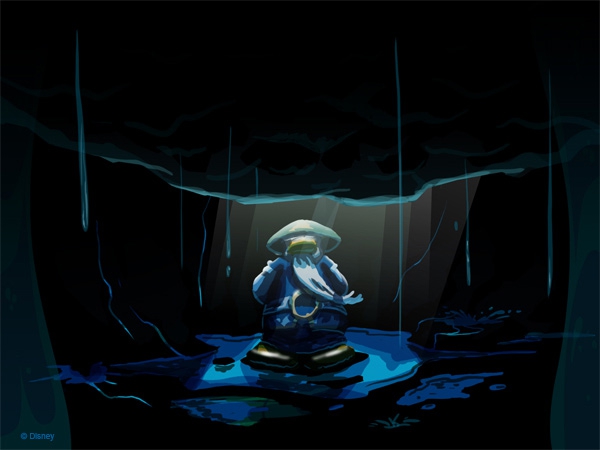 Hey – did you know that in Card-Jitsu Water, Sensei is programmed to search your item inventory for specific items (like the squid lid or other ninja items) and if you have them, he’ll comment on them?

Did you know there is
a squid on your head? I’m sure
it will help you train!

Yup. Depending on what you’re wearing or what you have in your inventory, Sensei might come up a special haiku for you. Here are just a couple of examples that you might have never seen:

Your Amulet shows
your desire to master
all the elements

Ahh, the Beta Hat.
The most ancient of all hats.
I rarely wear mine.

Ah, black puffles are
Masters of Fire.
Is yours…grumpy in water?”

Oh! You have a beard!
A fine choice. Mine helps me train….
Wait. Is that tied on?

Again, a fun piece of concept art from Waddledodds that inspired the team when it was time to start thinking Card-Jitsu Snow.

Also, we asked Sir Champion and Pirate for early room concepts for snow. Some of these weren’t made because we had to keep the snow storm in check so the room wouldn’t lag when tons of penguins waddling around in them! 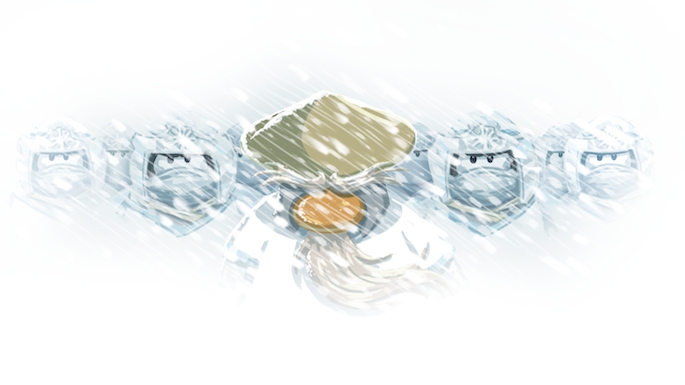 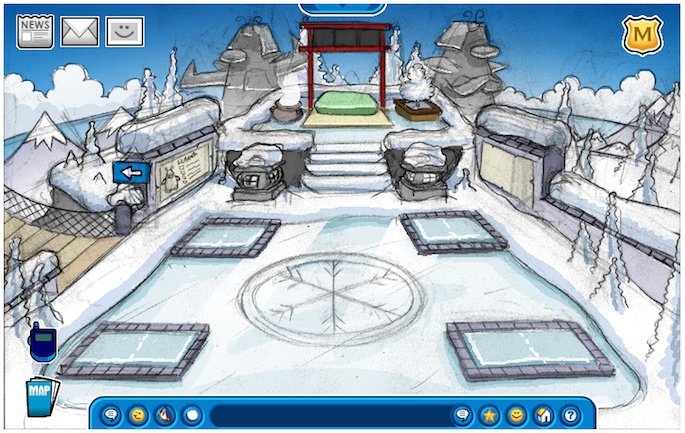 While we were building out the Card-Jitsu experiences, the team was so excited by the thought that the stone puffles in front of the Dojo could maybe come alive. 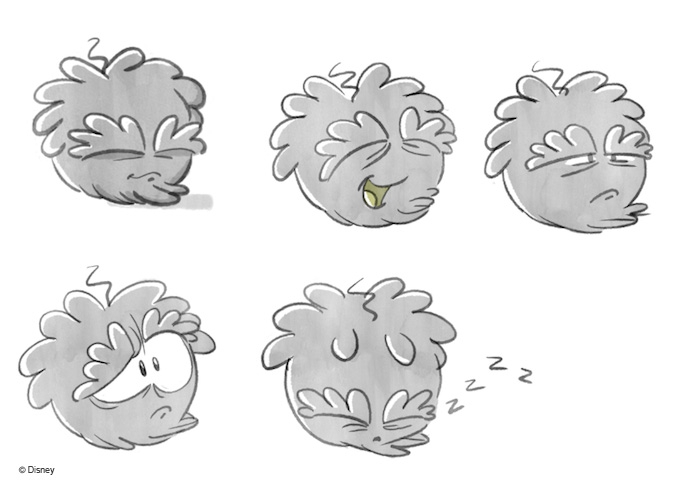 Although we didn’t make this grey puffle, we had so much fun thinking about it! The team still loves the thought that mysterious gray puffles are out there somewhere – or waiting to be found/uncovered!!

For the 2012 Medieval Party, the team came up with this great teaser on our homepage! The shadow of Scorn would fly across the island and then disappear, so you had to pay close attention to catch a glimpse. 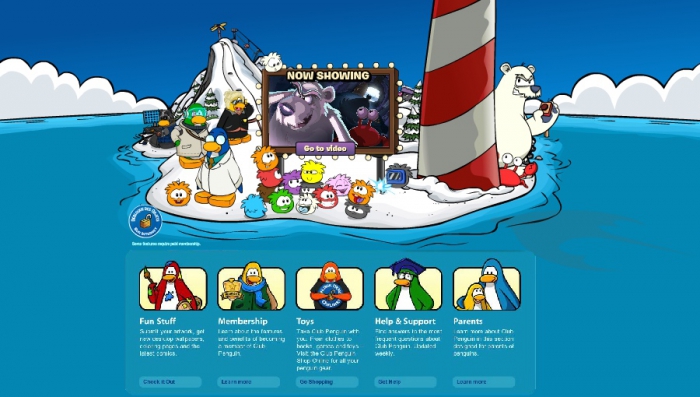 From the archives, here’s the history of Scorn:

A menacing and domineering dragon. He provides a villain for the Medieval parties and a great plot device for traditional quests. Inspired by Smaug and Sher Kahn. Both of these stories (see below) establish Medieval as another time period, but one which we don’t use the Time Trekker to get to. Scorn generally doesn’t threaten the present-day island (or may not even exist there).

Once upon a time, the lands of Club Penguin lived in peace and harmony. They were separated into many different kingdoms: dragons of Dragon Peak, the Fairies and Forest Folk of the Fairy Woods, the Wizards of the Mushroom Kingdom, the penguins of Royal Village, and the Guardians of the Sky Kingdom. Then, one dark day, a mighty beast appeared in the skies. He was Scorn, the Dragon King, and with his evil magic he plunged Club Penguin into darkness Now the lands of Club Penguin cry out for a band of Heroes to gather together, unite the kingdoms, and defeat the Dragon King once and for all!

Scorn was defeated by a group of heroes at the top of Dragon Peak. Peace was restored to the five kingdoms of Club Penguin. 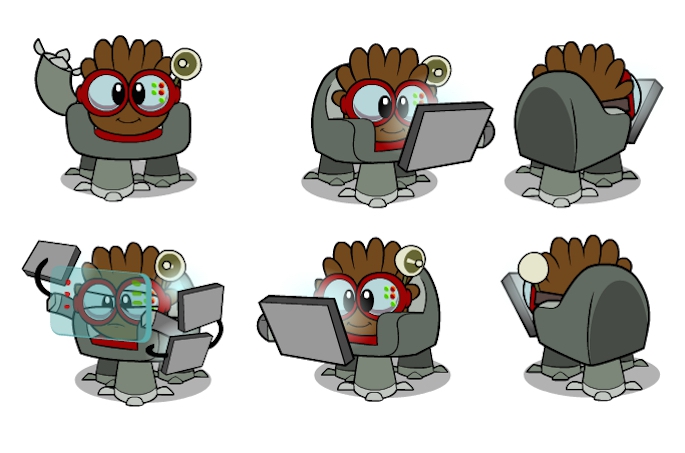 Here’s a fun concept idea for an elite brown puffle. It wasn’t made, but we still love the idea!

Here are some early concepts about what the Pet Shop and Puffle Park started as. The team also explored a game with O’berries, too. We didn’t make that, but it’s still fun to look back at all the different ideas. 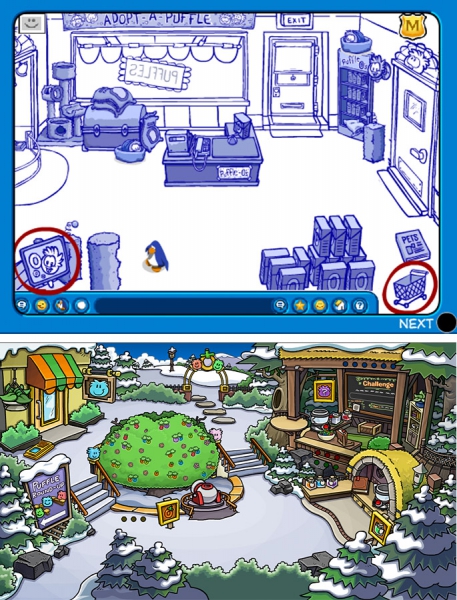 #17 – Arrival of the Puffle Expert Penguin…

Although PH had her debut in the Nintendo DS game WAY back long time ago, when the team was discovering more and more puffles, we knew we needed a mascot to help! Here are some of the first gorgeous drawings of PH that inspired the team. 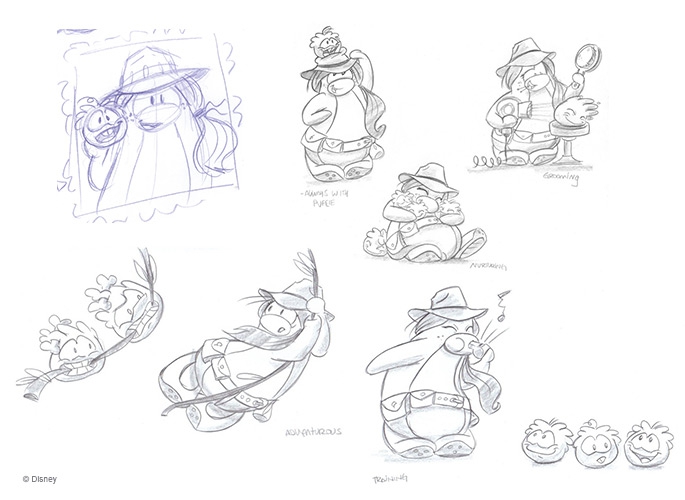 Over the years, Rockhopper went from being a PARROT to the tall-tale-telling swashbuckler he is today. Here’s a look back on the art progression of our favorite pirate penguin, CAPtain RockhoPPer! BEEeeep*… ;;Error code = Null object does not exist. unrecoverable error. goodbye.

This is an amazing story we love because it’s a reminder about how awesome our CP audience is and how important it is to listen to them! Did you know that Operation Blackout was actually the result of someone accidentally seeing some scribbles on the office whiteboard?

And here’s a bit of random history: 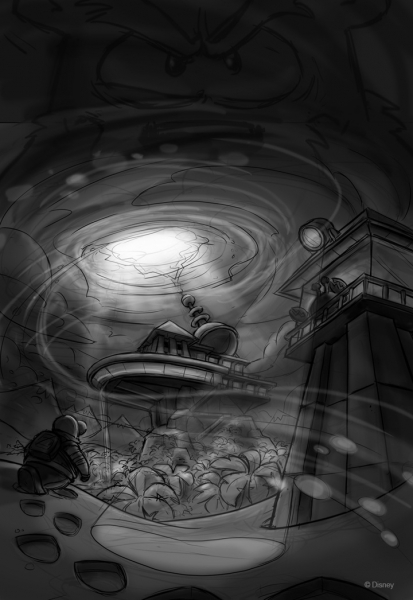 Get ready penguins, because this next time warp will blow you away!

One of our artists, Amazem, drew this for one of our Halloween parties to show what each room of Gariwald VIII’s Mansion would like from the outside. Kinda like an epic haunted CP version of a doll house – AMAZing riGHt?! ((Goto END. END!@)) ThiS is MINE….DANGER DANGER! ZZT *BZORT 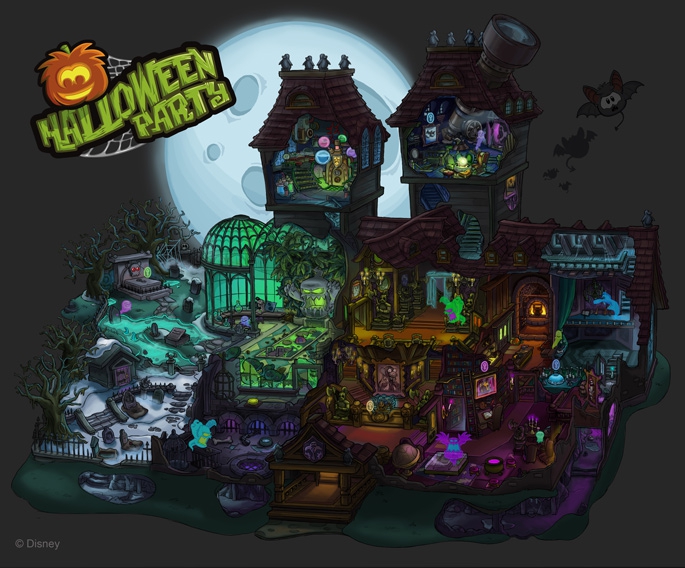 Check out some of the team’s early ideas for Cadence’s first big music video, “The Party Starts Now!”

This is also the last post in our CP Time Warp series – hope everyone enjoyed our little blast from the past! Which time waRp wAS YOUR favOrite? BZZZzzzzztttt ;;error 392 BLAS!T!!XF# 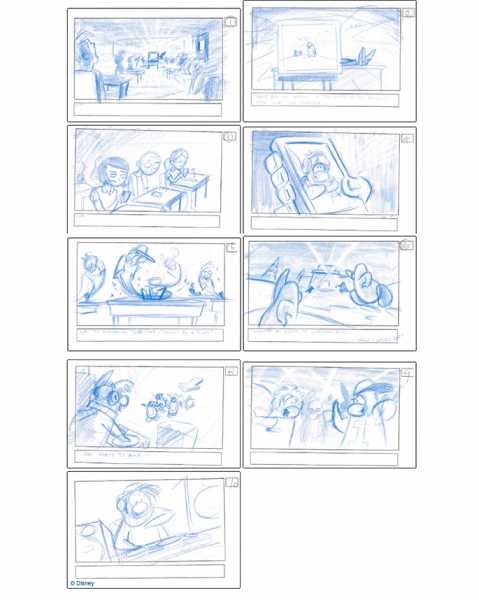