Not only is it time to stop the Rookie mascbot, but it’s also revealed there is a Herbert mascbot in a secret lair that needs destroying, too!

The day starts off like any other. You sign on and Rookie says there’s a Rookie mascbot needing attention. 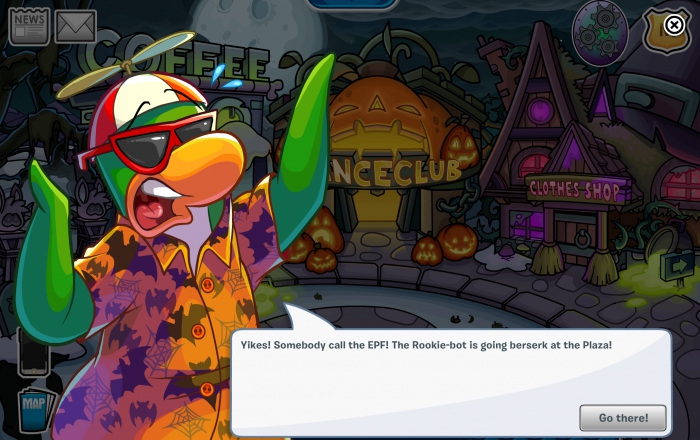 Yikes! Somebody call the EPF! The Rookie-bot is going berserk at the Plaza!

Go to the Plaza and click on the Rookie bot. 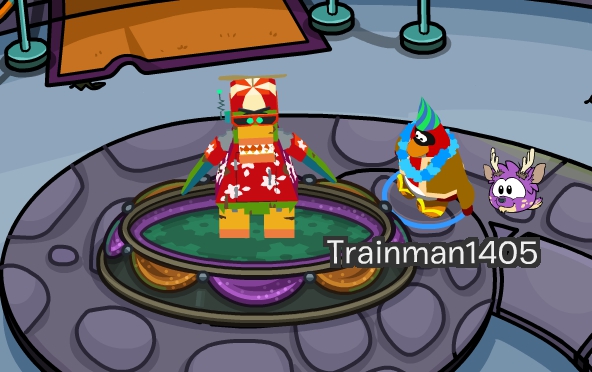 He’ll tell you that you need to retrieve some clown makeup. 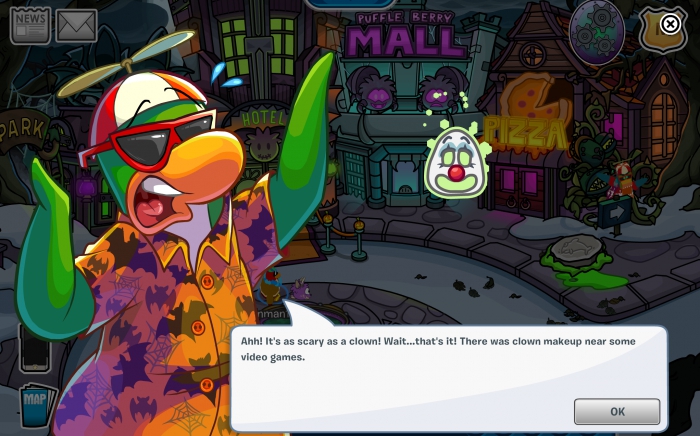 Ahhh! It’s as scary as a clown! Wait…that’s it! There was clown makeup near some video games.

You’ll find the clown makeup at the Dance Lounge. 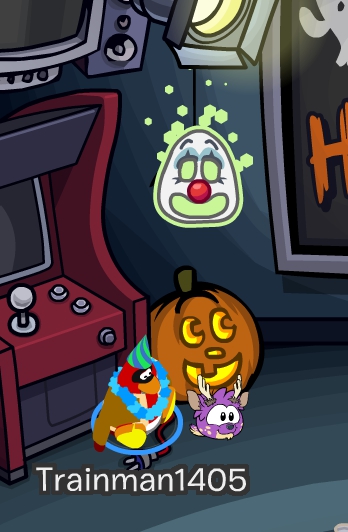 Go back to the Plaza, click on the bot again, and complete the puzzle. 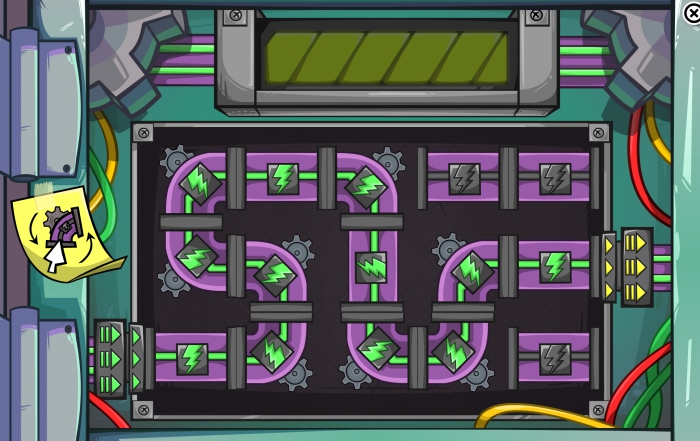 You’ll then get a message from the bot… 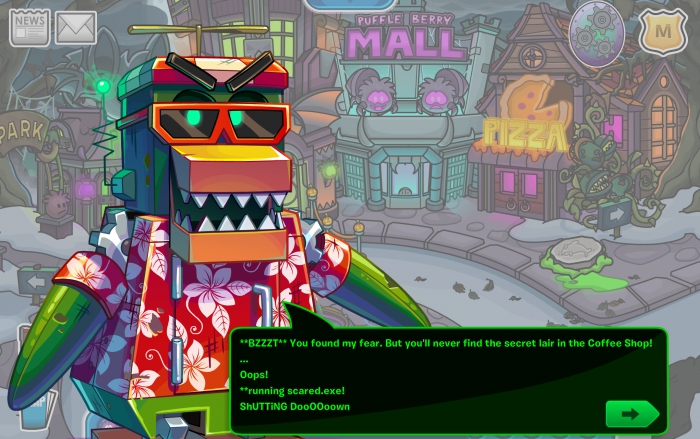 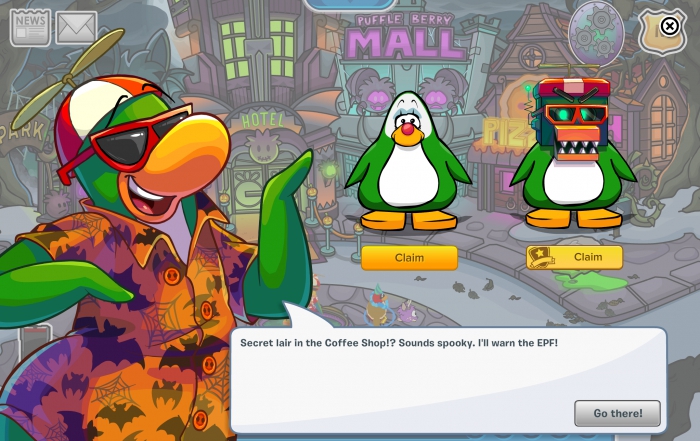 But that’s not all! Head to the Coffee Shop, and look! Under the carpet is a secret lair. 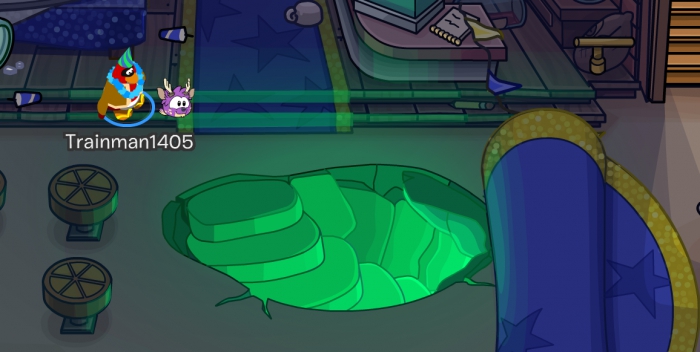 Go down the steps and you’ll see Herbert, Klutzy, and a giant Herbert Mascbot. 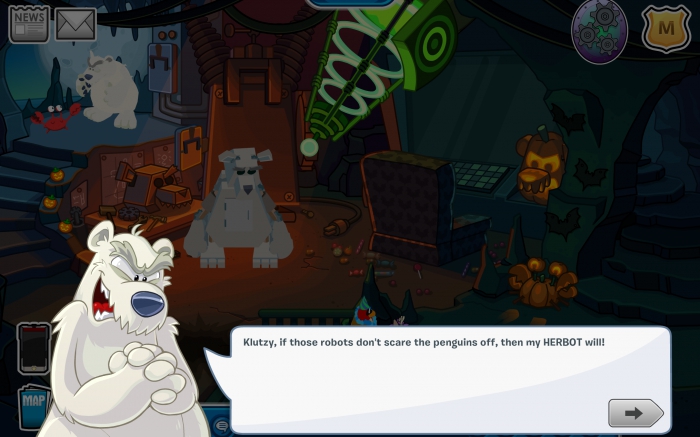 Klutzy, if those robots don’t scare the penguins off, then my HERBOT will! 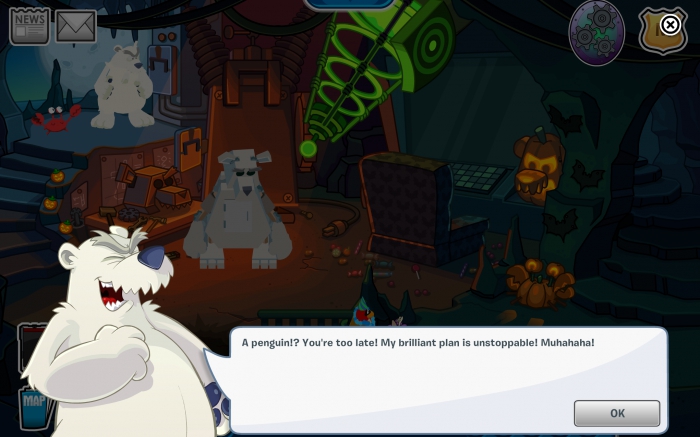 A penguin!? You’re too late! My brilliant plan is unstoppable! Muahaha!

Then the Herbot will butt in. 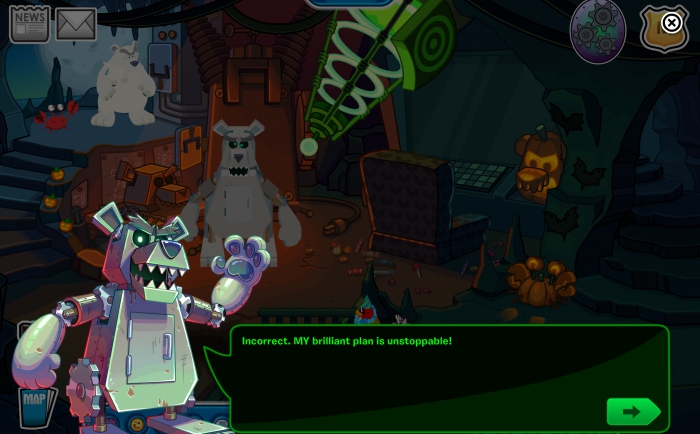 Incorrect. MY brilliant plan is unstoppable!

To which Herbert responds to. 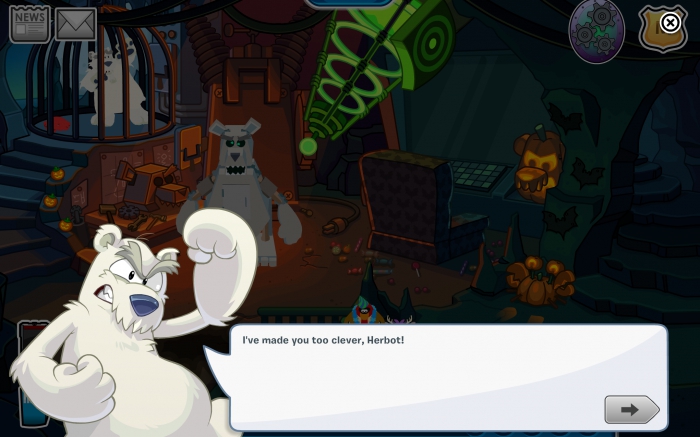 I’ve made you too clever, Herbot!

Gary will then appear on the computer screen and ask Herbert what his fear is so the bot can be stopped. 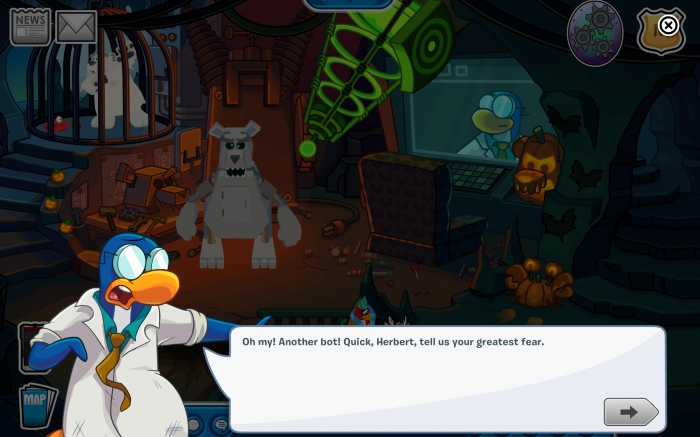 Oh my! Another bot! Quick, Herbert, tell us your greatest fear.

Naturally, Herbert does not want to. 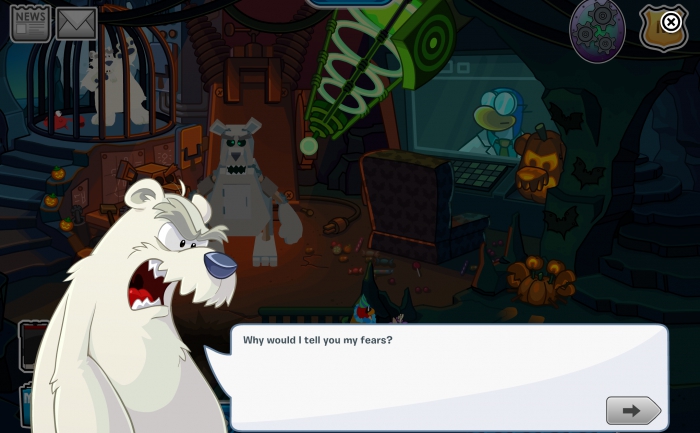 Why would I tell you my fears?

Gary gives up and says you need to find a way to overload Herbot. 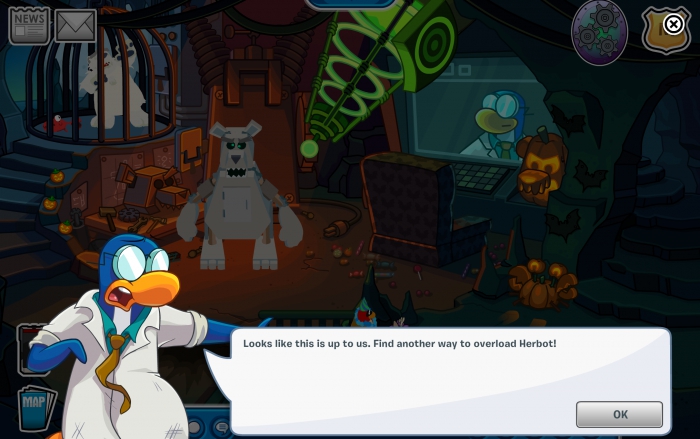 Looks like this is up to us. Find another way to overload Herbot!

When Herbot is standing in the path of the laser, throw a snowball at the conveniently placed target on it. It will shoot its laser beam at the bot. 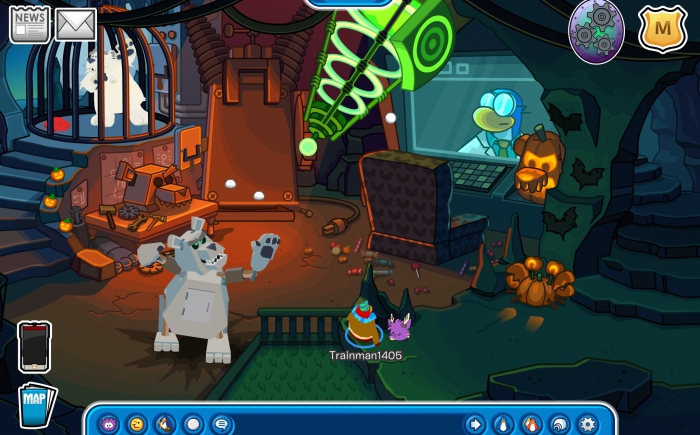 Once the beam makes contact you need to solve the puzzle. It’s a bigger one. Start on the left and work your way to the right. 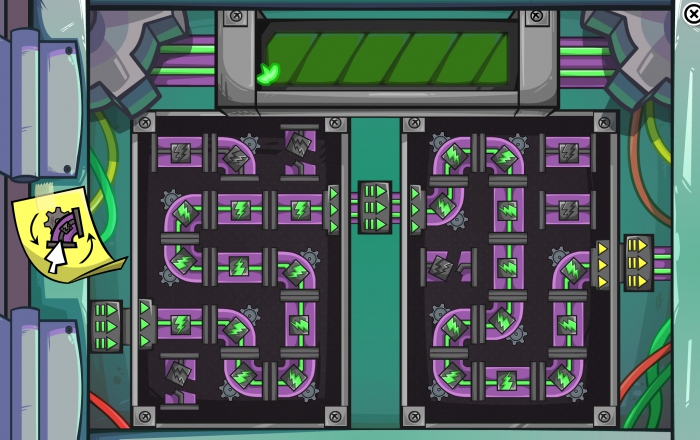 Once done the Herbot will explode. 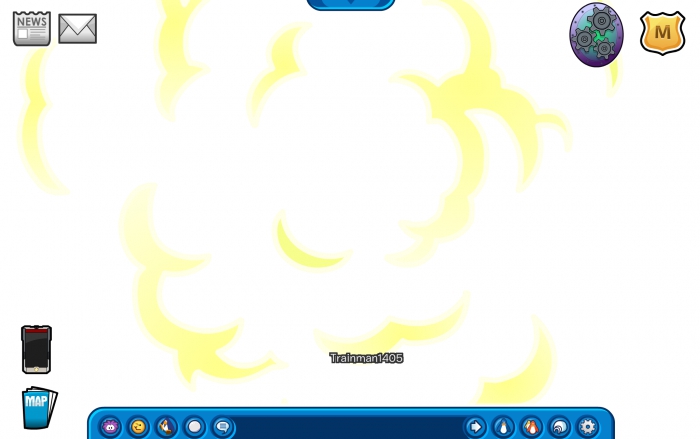 And, if history has taught me something, it’s that Herbert and Klutzy will run away and escape. 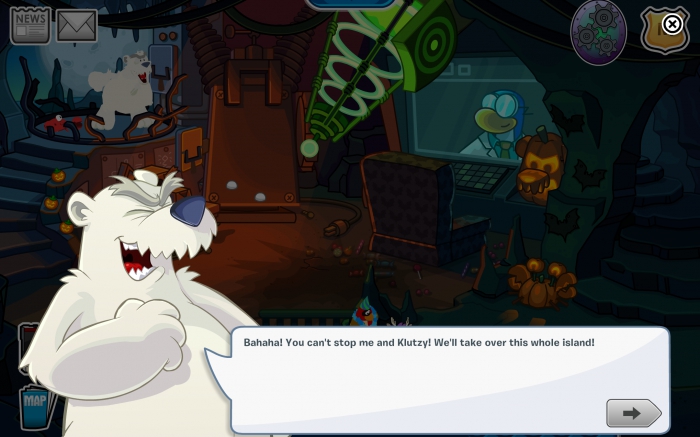 Bahaha! You can’t stop me and Klutzy! We’ll take over this whole island!

You can then collect another free item, or two if you are a member. 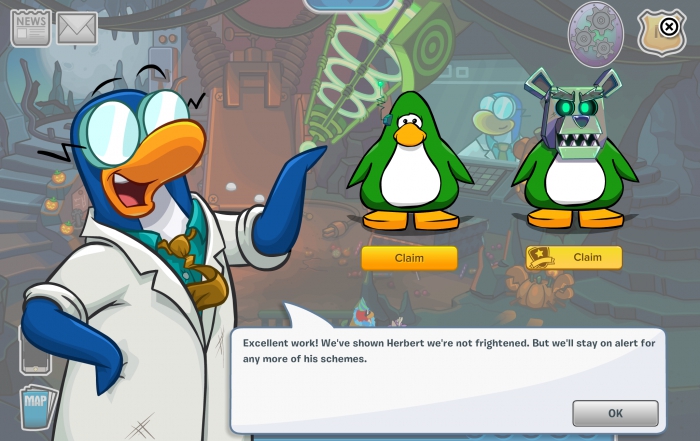 Excellent work! We’ve shown Herbert we’re not frightened. But we’ll stay on alert for any more of his schemes.

That wraps up the 2015 Halloween Party. It’s going on for another week, so enjoy the rest of it!