This week’s Penguin of the Week has now been posted. It’s Chingu123, who was actually featured on Club Penguin’s blog two years ago! Don’t believe me? Have a look!

Anyway, Chingu was nominated by Kaylee18201, who said the following:

Hey there Club Penguin! I’ll take the honor of nominating, the nicest, funniest, craziest penguin in all of Club Penguin, my best friend: Chingu123! Chingu is just simply AMAZING! There are so many things I could say about him, but I’m running out of letters. Anyway, Chingu and I have lots of fun adventures together! One time, we were explorers adventuring in the forest. We found a new dodo bird puffle! Chingu always goes out of his way to help others. I hope you nominate him! WADDLE ON!! 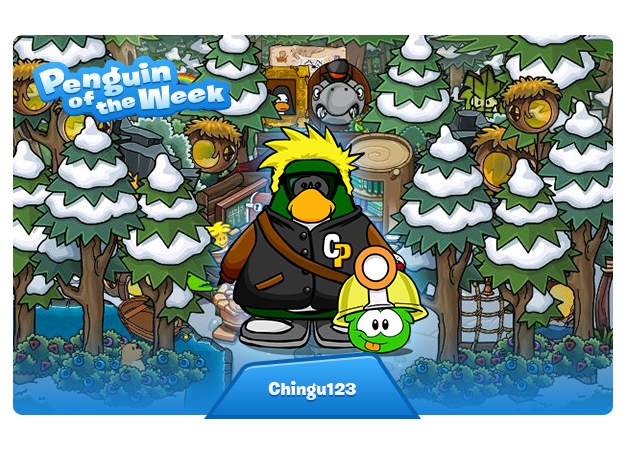 That’s awesome, Chingu! As a reward 10,000 coins and the Penguin of the Week Background have been added to their penguin account.

If there’s someone you’d like to nominate for Penguin of the Week you can do so by commenting on the Club Penguin Blog with their username and why they deserve to be chosen.