On the 18th of June Club Penguin has had updates in 2010. The Island Adventure Party began, new furniture and igloo catalogues were released, and there was a new pin. Also, on this day in 2013, Club Penguin released their official Facebook page, which has since accumulated 1.5 million “likes”.

At the 2010 Adventure Party the whole island was decorated as a jungle. The party had two special rooms, the Tree Forts room and Ship Battle. Rockhopper was waddling around the island so you could collect his background if you met him, plus the Miners Helmet and Pirate Bandanna items were available at the Cove. You could also collect the Treasure Cove Background by finishing the Paper Boat Hunt, and, if you were a member, could also collect the Marooned Outfit at the Tree Forts. 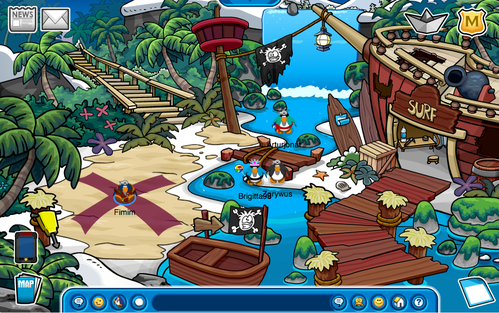 Thanks to Fimim for the image!

For the Paper Boat Hunt you had to go around the island, find eight paper boats, and once you did that you could collect the free background then go to the Cove, wear the Miners Helmet, drill on the red X that marked the spot, and that’s how the Puffle Bandanna was obtained – it was buried treasure.

Also on the 18th of June in 2010 Club Penguin hid a new pin. The Light Bulb Pin was hidden at the Pizza Parlour. It is Club Penguin’s 127th pin and is the seventh pin to be hidden in that room.

The final updates on this day in 2010 were the furniture and igloo catalogues being updated for the month. The furniture catalogue featured items such as the Penguin Mannequin, Wall Rack, Tropical Palm, Pirate Ship, Life Boat, and more! The igloo catalogue brought back the Fish Bowl Igloo.