On the 6th of May there has only been updates on Club Penguin in 2011. A new edition of the Penguin Style was released and so was a new pin.

The theme of the new items in the May 2011 Penguin Style was, unsurprisingly, medieval once again. Four new pages of items were in the catalogue, plus the Blue Dragon Feet item was hidden. 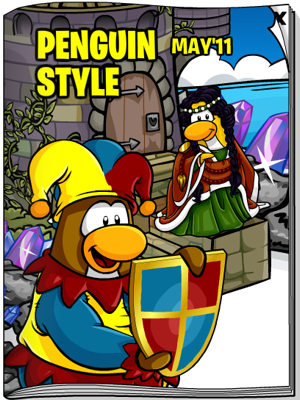 The other update in 2011 was a new pin. The Medieval Shield Pin was hidden at the Dojo Courtyard. The pin is Club Penguin’s 160th pin and was the second pin to be hidden in this room. Due to a bug it was released quite a bit more than two weeks, the standard length of time a pin is hidden.