On the 25th of May Club Penguin has had updates in 2007 and 2011, but only in-game updates have occurred in 2007. In 2007 the Cove opened at a special members only party and a new pin was released. In 2011 the beta team on Club Penguin’s website was updated.

On this day in 2007 the Cove room was released. For the first few days it was only open to members during a special event. Members could access the room, hang out and swim, and collect a free item. Nonmembers could collect the Whistle at the Forest, since all players could access that room, and members could collect the Life Ring at the Cove. While the Cove was members only only until May 29th, the Whistle was available at the cove until the first of June. Catchin’ Waves was added to the Cove later. 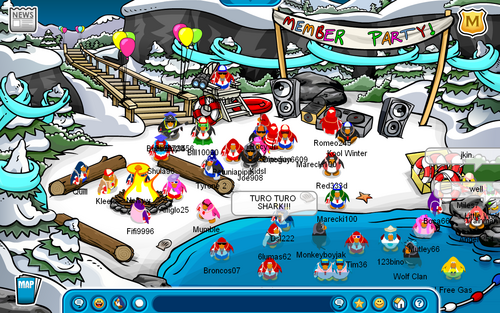 The other update on this day in 2007 was the Starfish Pin being released. It is Club Penguin’s 33rd pin and was the first pin to be hidden at the Mine.

As for 2011 updates, Club Penguin’s beta team section on their website got another update. Places For A New Map was removed and Snow Cone was re-added, although it was still broken and unplayable.