On the 24th of May Club Penguin has only updated in 2012. That year the 83rd field op mission was released and a week into that year’s medieval party nonmembers could finally collect the items from the first knight’s quest, as there was a bug not allowing them to obtain them.

The 83rd field op mission required you to go to the Mountain and power up the chipset. These were Gary’s orders:

Splendiferous, Secret Knights. The Dragon King is defeated. Now we must seal him away! Go to his statue on Dragon Peak, and use thy tools to power the seal. Onward!

Once you finished the field op Gary would say the following to you:

Well done, Agent. Your actions have been exceptional, given the… circumstances. I expect the island to return to normal now. Stay sharp, and watch out for threats.

The other update on this day in 2012 was Club Penguin fixing a bug. This was the first year nonmembers were allowed to take part in the first knight’s quest, but unfortunately Club Penguin forgot to make the items you can get during the quest available to all members. It took a week, but finally nonmembers could get the Iron Armor, Iron Staff and Shield, and Iron Helmet. 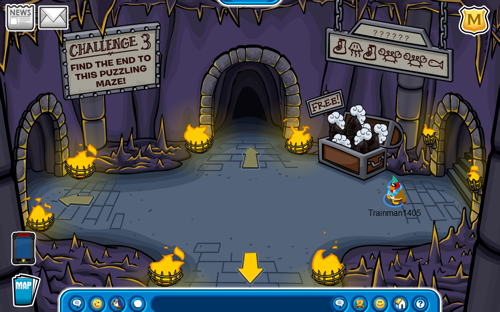