On the 23rd of April there has been one update in 2010 and one update in 2014. In 2010 a new pin was released and in 2014 the final free items were now available at the Puffle Party.The pin hidden on this day in 2010 was the Leaf Pin. It was located the Ski Hill. The Leaf Pin is Club Penguin’s 120th pin and was the fourth pin to be hidden in that room. 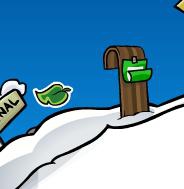