On the 27th of March there were updates in 2009 and 2014. In 2009 game upgrade catalogues were added around the island, the sports catalogue was updated, the martial artworks catalogue was updated, and a new pin was released. In 2014 a new task was available at the Muppets World Tour, Rockhopper was spotted in the telescope, and Club Penguin gave the game upgrade catalogues a few minor changes.

In 2009 the Dock, Ski Lodge, and Cove rooms had game upgrade catalogues added. Previously the power-up items for Hydro Hopper, Ice Fishing, and Catchin’ Waves had to be bought from the Sports Catalogue, but Club Penguin decided to branch it off into their own single page catalogues. As a result of this change, Club Penguin also updated the sports catalogue. The theme of the new items was baseball gear. 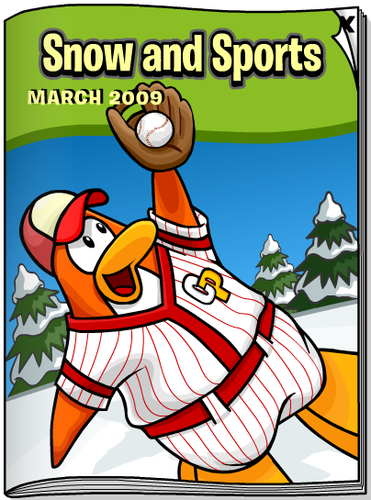 The Martial Artworks catalogue also received an update on this day in 2009, featuring one new clothing item and one new furniture item. The clothing item was the White Gi, costing 800 coins, and the furniture item was the Tea Table, costing 650 coins. The final update in 2009 was the Top Hat Pin being hidden at the Lodge Attic. It was the fifth pin to be hidden in that room and is Club Penguin’s 86th pin overall.

As for the 2014 updates, the biggest update that day was the eighth and final task being available at the Muppets World Tour. You had to fly to Mexico, aka the Dock, and meet Pepe to play the maracas. If you were a member you could collect the Mexican Maracas item, and after completing the task all players could collect the Mexican Sombrero. Another update in 2014 was Rockhopper’s ship, The Migrator, being spotted in the telescope. The final update in 2014 was Club Penguin updating many catalogues around the island with a few minor cosmetic changes. The sports catalogue, music catalogue, and game upgrade catalogues were updated to update the membership badge to its new design and also to add the membership badge to every price icon. Club Penguin also lowered the price of the Toboggan in the Sled Racing game upgrades catalogue from 300 coins to 200 coins.