In 2007 there were two updates. Rockhopper arrived at Club Penguin for the third time. The free item he brought for everyone that visit was the Pirate Belt. Members could purchase the Gold Wristwatch for 170 coins as well as the Pirate Dress for 400 coins. The Flamingo furniture item could also be purchased for 100 coins each. The second update was the party for that month, the Festival of Snow, had begun. The leftover snow from the 2006 Christmas Party was stored in the Lodge Attic and used at this party to create different snow sculptures. 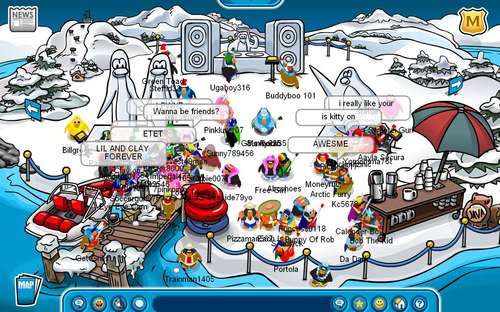 Bonus points if you spot me in the picture :P

In 2009 on this day Club Penguin  Along with the launch there were three different servers. They were Antarcique, a safe chat server, and two regular servers – Brise and Jour de Neige. This was the second foreign language version of Club Penguin to be released, with the first language being Portuguese in November 2008. Club Penguin in Spanish was not released until September 2009.

In 2012 there were four different updates. The most minor update was Rockhopper being spotted in the Telescope. He was on his way to Club Penguin for that month’s event, Rockhopper’s Quest. There was also the 68th field op, which was located at the Pizza Parlour behind the cash register. (this was with the old room design) The mini-game to complete the field op was decrypting the passcode, which was done by matching the shape given to decode the security. Another update was the third pin of 2012 being hidden. It was the Camera Pin and could be found at the Dock. It is Club Penguin’s 195th pin and was the ninth pin to be hidden at the Dock. The final update in 2012 was The Vikings That Time Forgot play being released at the Stage for the first time. It was a mashup of the stage plays “The Penguins That Time Forgot” and “Haunting of the Viking Opera”.