The new pin released in 2009 was the O-Berry Pin and could be found at the Iceberg. This pin is Club Penguin’s 84th pin and was the second pin to be hidden in this room. The second update in 2009 was Rockhopper arriving on Club Penguin again for another visit. His free item for everyone was the Treasure Map Background. Members could purchase the Swashbuckler Outfit at a cost of 550 coins. They could also buy the Wall Map (250 coins) and Treasure Chest (800 coins) for their igloos. The Porthole (160 coins) was hidden in the catalogue. 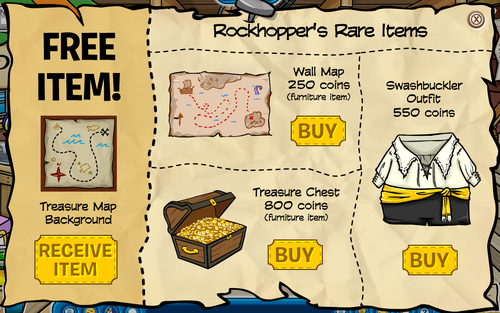