It’s been a rough year for Club Penguin. I think the best way I would summarise Club Penguin’s 2014 year would be that it was good on mobile and bad on the computer.

Here’s some highlights of Club Penguin’s 2014 year that come to mind, good and bad:

I will be honest, I haven’t liked a lot of what Club Penguin did this year so that’s going to be what a majority of the rest of this post is going to be about. For starters they oversaturated Puffles. They discontinued #WaddleOn and #TheSpoilerAlert, parties on Club Penguin suffered as a result of mobile, the Elite Penguin Force is dead, cheating on Club Penguin has been off the hook, rooms are overdecorated at parties…

Part of it I’m sure, for me at least, is because I’m growing older and don’t find things meant for children to be as fun anymore. Yes, I still like Club Penguin. Don’t get me wrong. But as you get older you’re less imaginative and when people get older they slowly find Club Penguin boring. I do enjoy seeing what’s new on Club Penguin every week however, I always have. But it’s definitely rare you’ll catch me logged on Club Penguin outside of Wednesday night or Thursday morning, depending when they update.

I would definitely like to see Club Penguin return to their roots a little bit. Not “return old CP” like people want, but seriously, would it kill the Club Penguin Team to make pins at least a tiny bit smaller and hide them in rooms they don’t normally hide pins in, rather than continuously hiding them underground or something? Some pins have been hidden in rooms at least five times within the past year or two, yet other rooms haven’t had pins hidden in them in over two years. Variety is key, which I will expand upon more later.

I also wouldn’t mind seeing a little more simplicity in parties. Yes, there are some parties like Halloween or the Holiday Party where Club Penguin is expected to go all-out, but they don’t need to do that every single party. I wouldn’t seeing a really simple St. Patrick’s Day party for a few days. I also wouldn’t mind seeing scavenger hunts again. I know Club Penguin appeals to little kids. What age in particular I don’t know, so maybe making tasks and quests at parties a little more difficult isn’t feasible. I definitely enjoyed the Halloween Party because it actually had a plot and the tasks required at least a little thinking. That’s what made it fun, like the old knight’s quests at the Medieval Parties – excluding the 2013 one, that is. Other parties, such as the Frozen party, had no actual plot to it. It was just more of Aunt Arctic going “oh by the way Elsa’s coming to visit Club Penguin so here you go enjoy bye also make sure you collect snowflakes to items ok cya for real this time peace i’ll be in the cp times next week”. That’s not a storyline. That’s just dumping Frozen on top of Club Penguin. I’m not saying all parties need a story line, for example the Puffle Party. That doesn’t need a storyline. Clicking on snowflakes for items is boring. I guess it’s better than nothing, since Club Penguin used to just have boxes of items you would collect, but back then rooms weren’t overcrowded so they were enjoyable. Plus because your friends were on Club Penguin, you could just talk to them in the game. Nowadays that’s very difficult because of the super strict chat filter that doesn’t even allow “Puffle Wild” through the filter, or at least it used to not allow it. I haven’t checked if they fixed it. I prefer Twitter to interact with friends because my perfectly clean and safe messages can actually be seen by my friends. I guess the naughty penguins who tried to bypass the filter are to blame. Or maybe the filter is a bit too strict, I don’t know.

Back to my topic of variety. I like variety. Quests on Club Penguin during parties, for the most part, do not have variety. Let’s examine some parties from this year:

When did parties start becoming repetitive and boring this year? The second half of 2014, right around the Music Jam. The Frozen Party was the first party available on mobile, and with the exception of the Halloween Party, they’ve all been mostly bad and repetitive. That’s why I say 2014’s been good on mobile but bad on the computer. Mobile is fun, mobile is flourishing, but ever since Club Penguin began bringing parties to mobile they’ve been extremely dull. I feel like because Club Penguin has brought parties to mobile, since it takes more work, they’ve had to short-change us on the computer version of Club Penguin. I don’t like that. Parties aren’t the only thing without variety now either, the furniture and igloo catalogue is a fantastic example. Every cover this year has been the same blue with a circle image in the center, whereas every month had something different in the past. 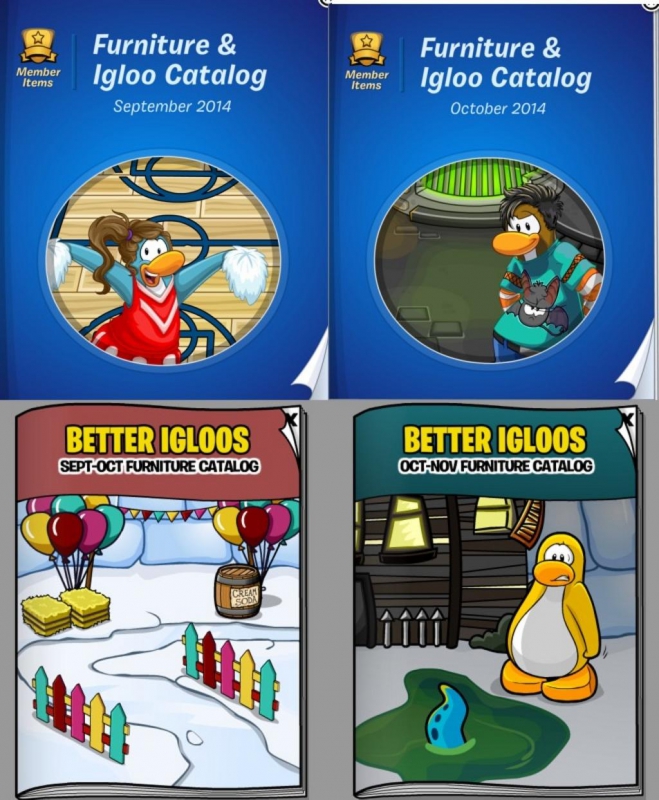 In the first half of 2014 parties weren’t even on Club Penguin itself. The Prehistoric Party in January, the Fair in February, the Future Party in May, and the Music Jam in July were held off the island. We accessed the Prehistoric Party and Future Party from the Time Trekker at the Snow Forts. No decorations on the island. The Fair and Music Jam were “destroyed” because they were always held on the island, except this year. The Fair was at a new fairground just for the party and the Music Jam was on a cruise ship. The Fair was pretty cool, although items were a bit expensive. And I didn’t like that most people, including myself, couldn’t collect all the pins from the spin to win. The Music Jam….I won’t even bother talking about.

The EPF is dead. It’s been dead. Same with stamps. Stamps haven’t been touched and the EPF is no fun aside from when they have a big operation roughly once a year. I liked the PSA more because even though we had to wait in-between missions, they had a big and continuous plot. And the PSA didn’t have pointless spy phone messages.

Now the subject of bugs. I think 2014 has been less buggy than 2013, except Club Penguin doesn’t do anything to fix them anymore unless it’s crucial, such as accidentally taking down a pin early…which they do often. It’s been several weeks and the blank emote box bug still hasn’t been fixed, for example. And that’s just one of many examples of unfixed bugs that have existed for a while and the team neglects to fix.

Enough of bugs, though. Let’s talk about the cheating epidemic Club Penguin has had this year! I’ve written a few posts earlier this year that I still agree with 100%. Even though Spike Hike commented on my post where I said I feel like Club Penguin doesn’t care about private servers or cheating to reassure us that they do, the actions of Club Penguin speaks otherwise. Private servers still exist in large numbers and people are still hacking items on Club Penguin. It’s not fun, it ruins the game experience to a degree. And back in November there was the absolutely thrilling experience where my privacy was completely compromised and my personal information was accessed in Club Penguin’s system, then to top it off my penguin was stolen. I’m still not happy it’s happened but the past is the past and I’m not going to continuously drag that and hold it against Club Penguin.

All of the negativity aside, however, I do applaud Club Penguin for trying new things and listening to our feedback.I wouldn’t mind seeing V0rtex’s vision of the future of Club Penguin implemented at some point. There have been some positives this year, don’t get me wrong. There’s been some enjoyable parties and Club Penguin really accomplished a lot on mobile this year, and I really enjoyed the We Wish You a Merry Walrus special.

I think I’ll wrap it up here. My membership will be renewed for another year later this month, which means I’m committing to playing Club Penguin for a ninth year. Hopefully 2015 has more simplicity and more variety…and not compromising parties on the computer just because it can’t be done on mobile yet. 2015 is Club Penguin’s 10th year running, so I hope they’ve got some surprises in store. I continue to look forward to logging on each week to see what’s new, something that never gets old.

What would you rate Club Penguin’s 2014 year? Was it good, bad, or in-between? What have been some of the best things about 2014? What about the worst? Feel free to voice your opinion and thoughts in the comments below. There’s an unlimited amount of space to type!