It all began when supposedly Polo Field posted on YouTube that February’s party was going to be the Fair: 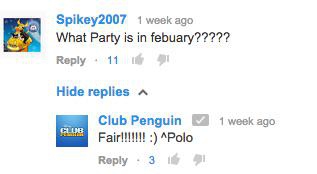 According to Phineas99 the comment was later deleted. (at least a week after publishing it judging the comment timestamps in the image above) Phineas99 also said a moderator confirmed it during an online meetup. Here is what Phineas commented on Club Penguin Memories:

Also, another mod confirmed it during an online meetup [2]

Unfortunately it appears both images have been deleted so again I cannot confirm that Club Penguin ever said February’s party will be a Fair. I can, however, confirm that Polo Field said that the party in February 2015 will not be a Fair. He posted this tweet earlier:

What February 2015’s party is is currently unknown. According to some it will be a music related party, perhaps another Music Jam. If so, I sure hope it’s a lot better than the one we had this year!

Thanks Spikey2007, Phineas99, and Roxopenguim.

33 thoughts on “Rumour Be Gone: Club Penguin Not Having a Fair In February 2015”