On this day in Club Penguin History there were five different updates in the 2010 and in 2013 Club Penguin released a new video. The most minor update in 2010 was there being some new servers added to the game. Unfortunately I do not have a list of which servers were added on this date. Moving on from that, there was also a new pin. The Snow Globe Pin was hidden at the Dock in the bottom right corner of the room where the land meets the water. The Snow Globe Pin is Club Penguin’s 142nd pin and was the sixth pin to be hidden at the Dock.

The other three updates in 2010 all have to do with the holidays and Coins For Change. Rockhopper arrived for the Holiday Party that started that day, and along with the Holiday Party, Coins For Change also began. Rockhopper’s free item for everyone was the Globe Hat. All players could purchase the Coins For Change Background from his rare items catalogue for 60 coins. Also in the catalogue were three T-Shirts for 100 coins each that members could buy. They were the Build Safe Places T-Shirt, Protect The Earth T-Shirt, and the Provide Medical Help T-Shirt. Members could also buy the Coins For Change banner to display in their igloo for 100 coins each. The December 2010 visit from Rockhopper was his fourth and final one of the year. 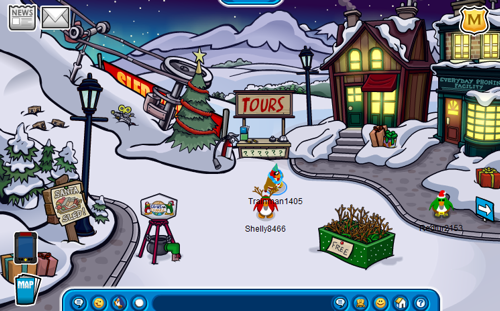 At the Holiday Party nonmembers could obtain the Reindeer Antlers at the Ski Village and members could go on Santa’s Sleigh and collect the Santa’s Present Bag item. At Coins For Change you could donate to build safe places, protect the earth, and providing medical help. In 2010 you could donate in 100, 500, 800, or 5,000 coin amounts.