Last Thursday Club Penguin’s 32nd magazine issue was released in the United Kingdom. This new issue contains a bunch of new content, some of which are sneak peeks of what’s to come later this month. Bloxxerman has provided me with all of the information about this month’s issue. 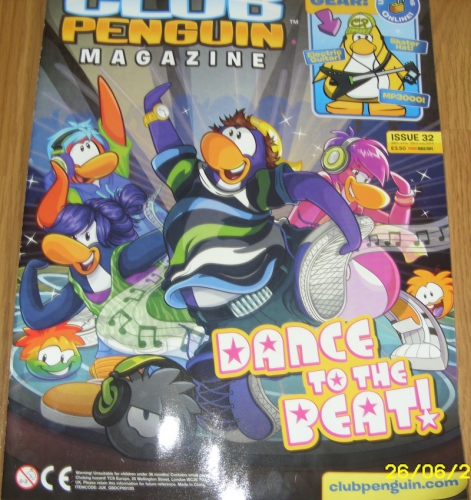 Here is the table of contents:

As mentioned in the list above, there will be a new SoundStudio. Here is a sneak peek of what the Dance Club will now look like: 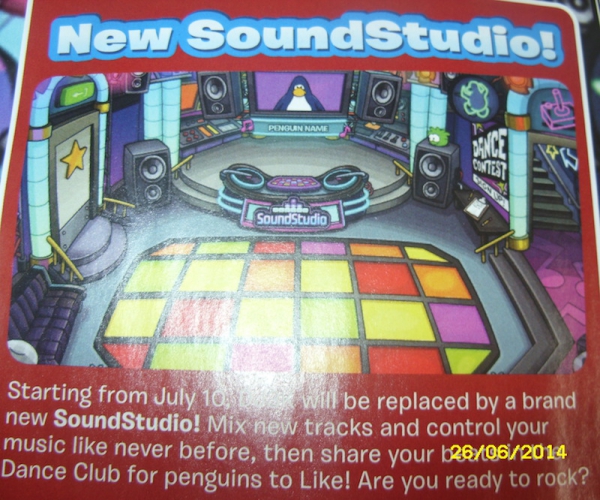 “Starting from July 10, DJ3K will be replaced with a brand new SoundStudio! Mix new tracks and control your music like never before, then share your beats in the Dance Club for penguins to Like! Are you ready to rock?”

The magazine also says the following about the Music Jam: “Cadence is celebrating her new single, “Best Day Ever” by bringing a special Music Cruise to the island! Penguins inspired by Disney Channel stars such as DJ Cole Plante, Zandaya, Samantha Carpenter, and Violetta will be performing and giving away awesome music packs during the party. Explore the luxury cruise ship, get the Tour Bus igloo, and share your tunes! Party starts July 17!”

Finally, next month’s issue will be a Summer Issue! It will come with three free items, “The Sundae Surprise,” “Desert Island (furniture),” and “Folding Chair (furniture”). It’ll also come with a free 7 Day Membership which Bloxxerman said can be given out in a contest. It’ll also come with the usual codes to unlock a total of 1500 coins, a treasure book item, and free Puffle Catch game. The unlockable items (Sundae Surprise, Desert island, and Folding Chair) are not new, they are returning items. The 33rd issue will be on sale beginning July 24th.