On this day in Club Penguin history there have been updates in 2009 and 2013. In 2009 there was a new pin and a new clothing catalogue. In 2013 there was a new clothing catalogue, Club Penguin’s mobile app was updated to version 1.1, Underwater Adventure returned to the Stage, the postcards were updated, and Monsters University login screens were added.

The new pin on this day in 2009 was the Safari Hat. This was Club Penguin’s 91st pin. It was the fourth pin to be hidden in this room, or the fifth if you count Rockhopper’s Key that was hidden in his journal. On the other hand the new Penguin Style featured three new pages of Summer styles. 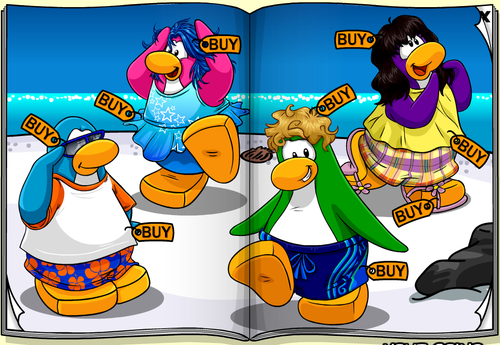 As for last year’s updates in 2013, the Penguin Style featured new university inspired styles. Club Penguin’s mobile app, which was only available for iPad at the time, was updated to version 1.1. The update added Card-Jitsu Snow, the final Pufflescape and Puffle Rescue levels, and it was also translated to Portuguese, German, French, and Spanish. The app icon was also updated to feature a ninja mask on the penguin. In addition, Underwater Adventure was the Stage Play for the fourth time and Club Penguin also updated the featured postcards and added two Monsters University logins screens to promote the June 2013 party, the Monsters University Takeover.