On the 6th of June in Club Penguin’s historic past there have been updates in 2006 and 2008. In 2006 the Cart Surfer game was released and in 2008 there was a new pin and a new clothing catalogue. There is an interesting story on how Cart Surfer came to be which you don’t want to miss out on!

Believe it or not, there is a back story to Cart Surfer that not many know. Instead of Cart Surfer there was originally going to be a game called Cave Runner. It was going to be similar to Cart Surfer, but from a first person point of view and all in 3D: you’re going through the Mine in a cart and need to dodge obstacles on the track. Unfortunately, it didn’t work out too well since the game is fast paced and you did not have enough time to react to the objects on the track so you would get hit all the time and lose. The team then changed the prototype so you collected coins on the track, except they felt that it was boring. (think Cart Surfer in a Temple Run style) The team was stuck on what to do since they promised users with a new game coming out soon but eventually Screenhog came up with the thought of Cart Surfer after combining their Cave Runner game and their idea of implementing a surfing game in the future, which was done a year later with Catchin’ Waves. Anyway, from the time Screenhog had the idea for Cart Surfer to the day it launched only a mere nine days had passed. Since then the game has only received a few minor updates. More tricks were added in July 2007 and other than that there have only been a few small cosmetic changes throughout the years along with the addition of stamps.

As for 2008, the new pin was the Icecream Cone Pin. You could find it in the Forest. This was the third pin to be hidden in this room. On the other hand, the Penguin Style was updated with the usual for the month of June: more Summer styles. You could buy swimwear such as swimsuits, the Pink Snorkel, the Pink Flippers, Hawaiian Shirt, and more. 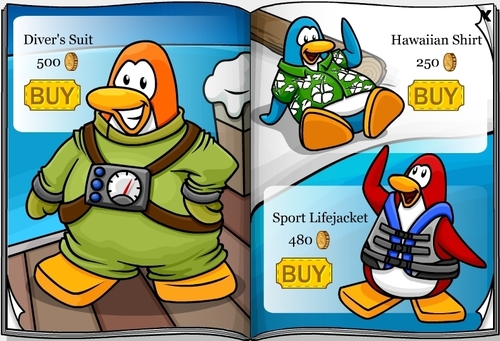