Polo Field sent Megg a tweet containing a link to Dropbox, a file sharing website. He deleted the tweet a minute later, but before he did I managed to see the links contents. It looks like Rockhopper’s journal is going to be updated soon!This was the image Polo Field sent to Megg. Check out the recent entries from last month: 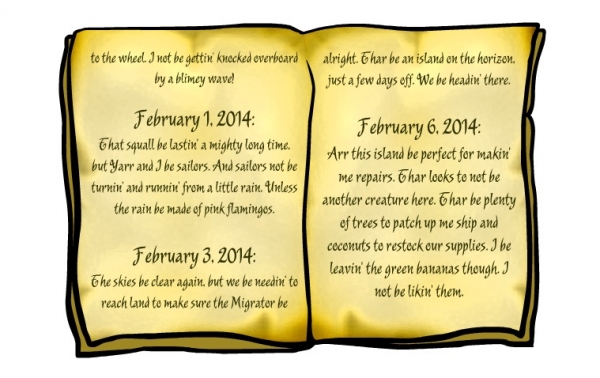 Here is what it reads:

[…] to the wheel. I not be gettin’ knocked overboard by a blimey wave!

That squall be lastin’ a mighty long time, but Yarr and I be sailors. And sailors not be turnin’ and runnin’ from a little rain. Unless the rain be made of pink flamingos.

The skies be clear again, but we be needin’ to reach land and make sure the Migrator be alirght. Thar be an island on the horizon, just a few days off. We be headin’ there.

Arr this island is perfect for makin’ me repairs. Thar looks to not another creature here. Thar be plenty of trees to patch me shup and coconuts to restock our supplies. I be leavin’ the green bananas though. I not be likin’ them.

UPDATE: A second page from Polo Field was updated to the Club Penguin Wiki. 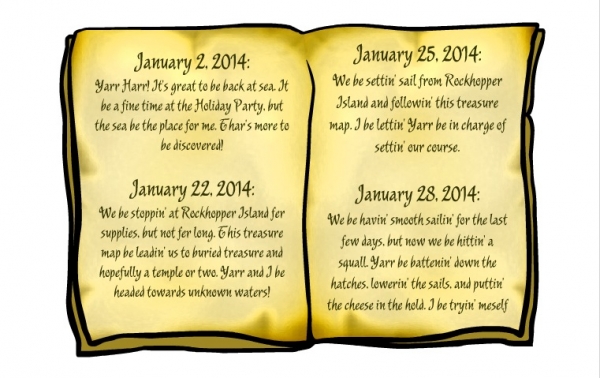 Yarr Harr! It’s great to be back at sea. It be a fine time at the Holiday Party, but the sea be the place for me. Thar’s more to be discovered!

We be stoppin’ at Rockhopper Island fer supplies, but not fer long. This treasure map be leadin’ us to buried treasure and hopefully a temple or two. Yarr and I be headed towards unknown waters!

We be settin’ sail from Rockhopper Island and followin’ this treasure map. I be lettin’ Yarr be in charge of settin’ our course.

We be havin’ a smooth sailin’ for the last few days, but now we be hittin’ a squall. Yarr be batterin’ down the hatches, lowerin’ the sails, and be puttin’ the cheese in the hold. I be tryin’ meself […] (continued above)

This was the tweet…do you think he tweeted it on purpose?

Rockhopper’s Journal can be found in the Book Room. Would you like to see more books added to the bookshelf?

4 thoughts on “Rockhopper’s Journal To Be Updated”