Day 8 of 12 for the Club Penguin Memories 12 Days of Contests 2013 is now here! Starting from the moment this post is published (December 20, 2013 at midnight PST) you will have exactly 24 hours (until 11:59 PM PST of the same day) to enter to win the code up for grabs today. The task differs day to day, so make sure you read instructions in each post carefully!

Before I begin though, here are the answers to yesterday’s contest. You did not have to correct the answer if it was false however for the heck of it I did include what the answers to the false questions really were. Congratulations to those of you who got all 10 right!

For today’s contest you need to comment below saying when the three items worn by the penguin in the image below were released. So for example, your comment would look like this – the example does not have the right answers, as it is purely an example so you get the general idea on what your comment needs to be like.

The head item was released in June 2013.

The face item was released in August 2010.

The neck item was released in September 2007.

To make things a little bit harder I am not saying what the names of the items being worn are. You’ll just have to identify when each item was released and comment saying when. YOU MUST INCLUDE THE MONTH AND YEAR WITH EACH ITEM FOR YOUR ENTRY TO BE COUNTED. You do not need to say what the name of the item is in your comment, but you can if you’d like. You also do not need to say what party or event the items were released at but it will not count against you if you do so. :)

Once you leave a comment with the answers, as long as all three answers are correct you will get an entry in the raffle for today. You can only comment with your answers once. The answers will be revealed in day 9’s post. The prize up for grabs for day eight is a one month membership code. Any entries for this day after 11:59 PM PST will not count. Instead, enter on day 9 once it is published at midnight PST on December 21st! Here is the penguin wearing the three items you need to say when they were released: 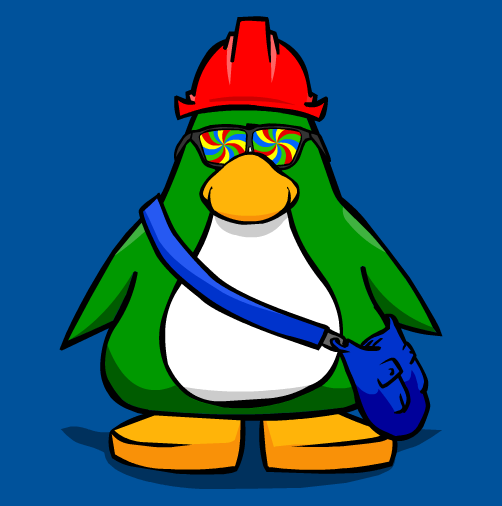 Do not cheat by entering under multiple names each day as you will be disqualified. Make sure you include your email address when submitting a comment so I can give you the code if you win! That is crucial, as without an email I cannot contact you to give you the code. All you have to do is put the email address in the email box when leaving a comment or stick it in your comment and I’ll edit it out so nobody else can see it. Remember, all 12 winners (one per day) will be announced on the 25th of December. You can reference this post at any time for all of the information you might need to know. If you have any other questions feel free to contact me at any time and I will try my best to respond as soon as possible. Good luck everyone, and may the odds be ever in your favour. :)