With Club Penguin’s 2013 Puffle Party nearly over, the Club Penguin page on the Disney UK website has been updated. (even though it says Puffle Party on it) It gives a brief overview of the Marvel Superhero Takeover. Check it out: 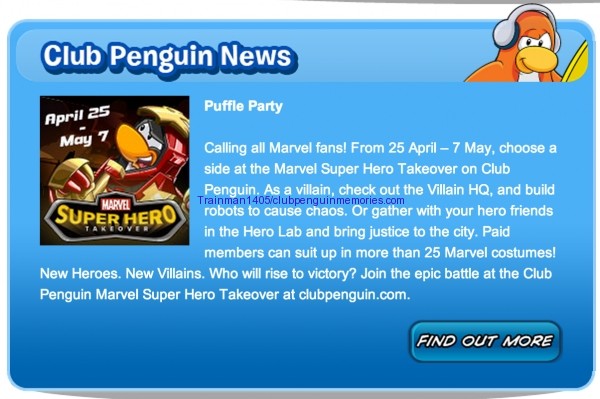 Calling all Marvel fans! From 25 April – 7 May, choose a side at the Marvel Super Hero Takeover on Club Penguin. As a villain, check out the Villain HQ, and build robots to cause chaos. Or gather with your hero friends in the Hero Lab and bring justice to the city. Paid members can suit up in more than 25 Marvel costumes! New Heroes. New Villains. Who will rise to victory? Join the epic battle at the Club Penguin Marvel Super Hero Takeover at clubpenguin.com.

How excited are you for the party?