Updates on the 2nd of January have occurred on two years so far. Those years are 2009 and 2010. The updates in 2010 were meant to be released on the 1st of January but due to unnamed reasons they were delayed by a day.

In 2009 a new pin and new clothing catalogue update was released. The Pin was the Gingerbread Man and could be found in the Lodge Attic to the left underneath the window. The new clothing catalogue had a special note, which you can read below. The new clothes included at the time were dance outfits and fiesta outfits for that year’s Waddle On Dance a Thon (where Cadence and Dance Contest were introduced) and the Winter Fiesta. 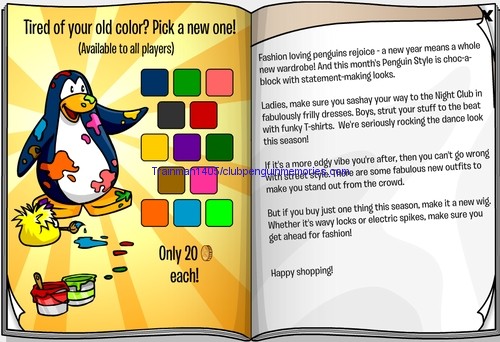 As for 2010, fireworks were temporarily added to the Mountain and Iceberg for the New Year. There was also the new Fireworks Pin, which was at the Lighthouse to the left of the stairs. There was also a new clothing catalogue. When the catalogue was initially released there was an error however, on the cover it said Jan 09 rather than Jan 10. This was later fixed. The January 2010 Penguin Style featured new make your own t-shirts amongst other things.