Walt Disney Records is releasing a Club Penguin CD the 12th of February next month, according to a Barnes and Noble listing online. The CD, costing $5.99, comes with six different songs. One of these songs is unreleased. 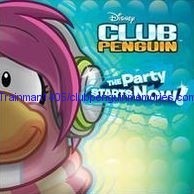 The fifth song, Puffle Party (Gotta Have a Wingman) is unreleased. Since Club Penguin releases songs having to do with their parties, I think the Puffle Party 2013 will be happening next month in February. Do you agree?