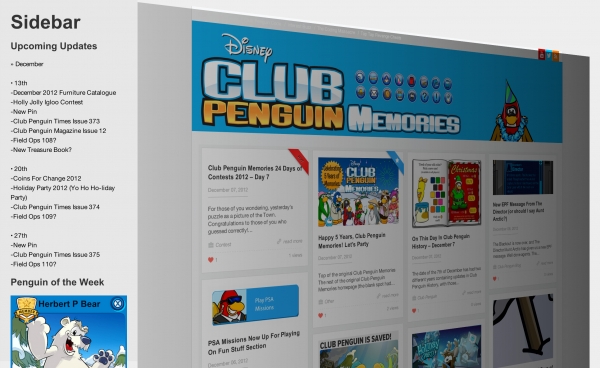 Phew, finally. What I thought was going to take an hour maximum turned into a whole fiasco that ate up my whole day. I originally said I was going to release my new theme January 1st, but I uh…decided to release it early. Which bit me in the butt, because as you probably noticed when visiting Club Penguin Memories for a while today it was down, saying the site would be back soon.

I thought it was going to be quick and easy, but no, lots of issues arose. I fixed one and two appeared. But Club Penguin Memories and its awesome new theme are finally working. Check it out. Now sidebars appears on the left and right when you view an individual post. In addition, the upcoming updates and Penguin of the Week are now in a sidebar that appears when you hover your mouse on the left side of your screen. Pretty cool, right? That’s not the only new feature, you can heart posts.

Soon I will re-add the blogroll and changing outfits in the header. I will also add a Club Penguin background too.

Let me know your thoughts, and if you find anything wrong let me know. :)

Also: Due to the downtime contest entries for day 7 are extended. You have an extra 12 hours to enter if you haven’t already, meaning you have until noon PST Saturday.

Update: You may have noticed some changes – I removed the cool 3D sidebar (sorry!) and replaced it with a sidebar on the right. Penguin of the Week (and soon the blogroll I had) will appear on single posts and pages. I re-added the post time like I had in the theme before this. If you have suggestions let me know.

64 thoughts on “Good Things Come To Those Who Wait (Updated)”