On October 26th in Club Penguin History there were updates on four different years. Those four years were 2005, 2007, 2008, and 2010. In 2005 the first ever Halloween Party was released. This was Club Penguin’s second party in the history of the game, with the first one having been the Beta Test Party which was in the previous month, September. For the first ever Halloween Party just a few rooms such as the Town and Dance Club were decorated.

As for 2007, the Halloween Party for that year was released. This was Club Penguin’s third Halloween Party. Much of the island was decorated. Night of the Living Sled made its first ever appearance at this party. There was also a new pin hidden on this day. It was the Spider Pin and located at the Cave/Pool. It was Club Penguin’s 45th pin. The pin actually moved so it was a bit tricky to get! The Yellow Puffle also appeared at this party and was made available in the coming weeks. 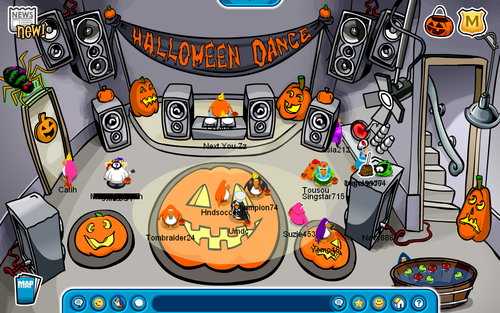 The only update on this day in 2008 was the igloo decorating contest for Halloween ending. As for the final year so far with an update on the 26th of October, in 2010 the 20th field op mission was released. It was located at the Mine to the left of the Puffle Rescue table. The minigame was to power up the chipset by guiding the micro battery.